We finally got around to retesting all our parts on the new 09 JCW.  WE have very good results on our 07 and 08 R56 Minis when we tested every single ALTA part back to back.  To this day we have proven these results over and over again with customer cars and new R56's we purchased. You will see below once again we have proven the same parts on this new 09 JCW.

We have learned  a few things over the last couple years with these cars. The first years of R56's had some significant mapping differences than newer cars.  This was evident when we tested our catback exhaust on our early R56 where the Exhaust actually made 2psi more boost everywhere.  On later cars the boost stayed the same which made the gains less, but still a significant 20whp.   These later cars ECU's seemed to have better logic for the boost control and was something we expected to see on this 09 JCW.  And sure enough we saw evidence of this but more on this later.  With that all said, the gains we saw were still very good overall. But one thing this car is dying for is more boost!  The very last dyno run is evidence of something every single R56 owner will be dying to get their hands on....... 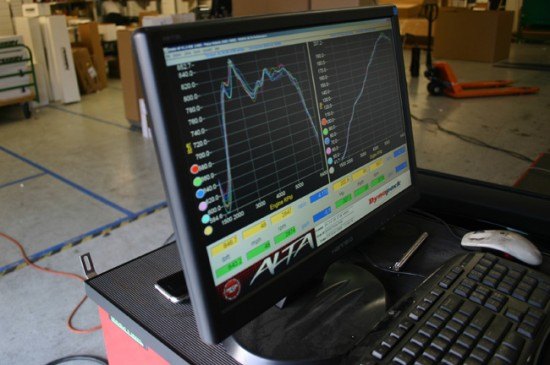 Onto the testing!  To make the results as legit as we could, we prepped the car by removing the bumper(for better FMIC access and install), removed all but one or two key bolts on the turbo heatsheild, and of course a couple on the Intake system.  These allowed our swapping of parts to be as quick as possible to minimize any skewing of the results.  An important thing to note is every part we installed we took the averaged gain as the result. This means the first run (generally the most HP) and last (generally the least HP) was thrown out.  You can see evidence of this using the colored dots on the side of the dyno graphs. The Red and yellow were never used. 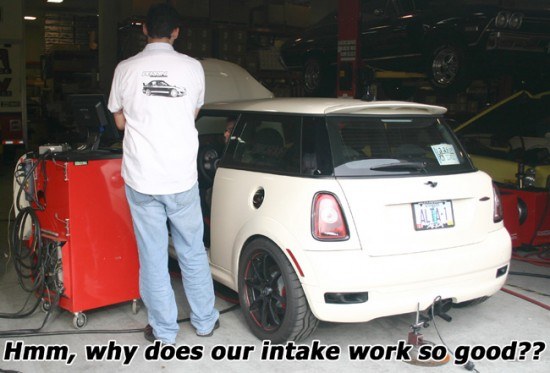 First up is the most obvious and easiest to install the ALTA CAI.  Some of our other tests we had done we experimented with hood down, hood up, fan in the scoop area and so on.  This time we left the hood open but no fans providing fresh air to the filter.  I know it sounds counter productive, but the results were still impressive. 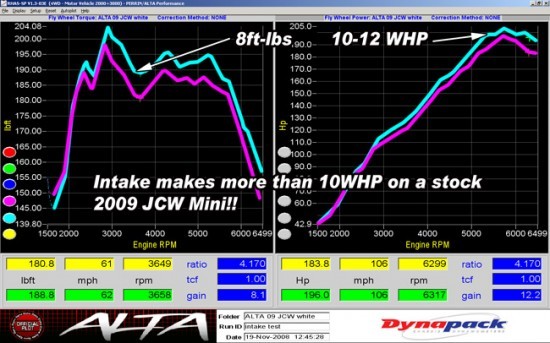 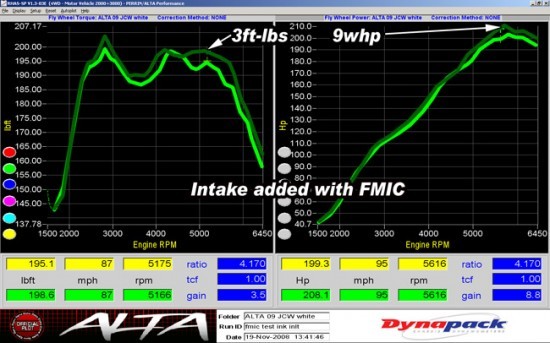 Above is the intake results, then we added the FMIC The graph is showing the stock car, with the FMIC only installed, then we added the CAI to the mix.  Again a decent gain from 5000 RPM on up.  More solid proof the ALTA CAI works! Before we moved on, we tested the ALTA turbo inlet hose compared to the OEM JCW hose.  As some may know the OEM  JCW hose is an upgrade from the normal R56 hose. So our ALTA hose may not actually make more power, and we were a little worried as to what we would find. 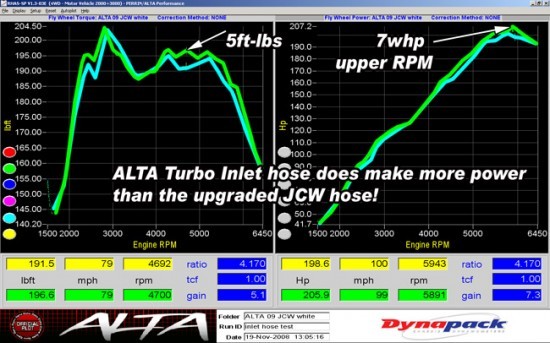 Above is the turbo inlet hose added to the ALTA intake We were relieved to find the ALTA does out perform the JCW part. And while it may only make 7whp or so it is a gain!  Looks like another worthy part for you R56! For the FMIC test, we were excited to show it work on a stock car.  In the past all the testing was done with turboback exhausts installed or intake and turboback. We did this because we truly thought no one would be installing them on a stock car, but what do we know!   At least once a week people ask how it would do on a stock car, so we finally did it!  It really wasn't a surprise that it made power, but it was a surprise as to how much and where it made power. Above is the FMIC tested on a stock car. The test above with done with the bumper removed from the car.  In one way this really helps the OEM FMIC out because the bumper covers up a good portion of the bottom of it. In another way, the gains shown above are favoring the OEM FMIC, but ours still makes more power!  Because of how we did this test, we were able to feed both FMIC's the same amount of air, and very consistent at that. 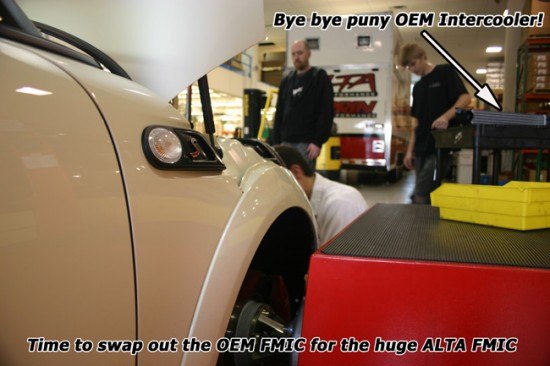 This next graph is a little out of order, but it does show the gains our FMIC had when running it back to back with the ALTA turboback and CAI with inlet hose installed.  Not quite as much as with the stock car, but if we had a way to turn the boost up........ 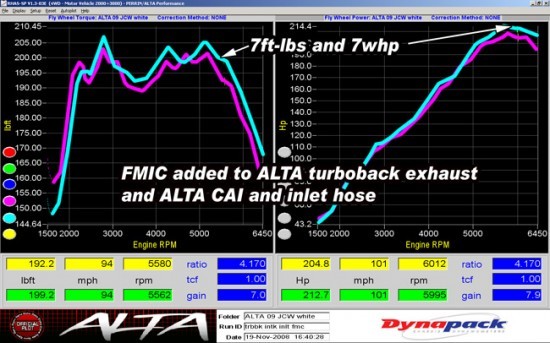 Above is the results when adding the FMIC to our car with the turboback exhaust, CAI, and turbo inlet hose. Ok and last but not least the turboback results.  On the 09 JCW the exhaust system is a bit different than the older cars. There is one central location for the cats, the downpipe.  On the older cars there is a cat in the downpipe and one in the middle of the exhaust. And we built our turboback system to suite these early cars.   On the 09 JCW, the downpipe has 2 cats, but both very large diameter, and stuck one on top of the other. This is great  for keeping back pressure to a minimum and it might me our results may not be as good.  The other change is to the middle part of the exhaust. There is a cat missing here that normally would suck up some of the sound, so Mini made the resonator about 2 times longer than it was. The ALTA 3" system we were installing  was the one we made for the normal R56, so it has 2 cats, one in the downpipe and one in midpipe.  What this means is for the 09 JCW the entire system has to be installed as the catback or downpipe can not be installed separately with the OEM pieces. 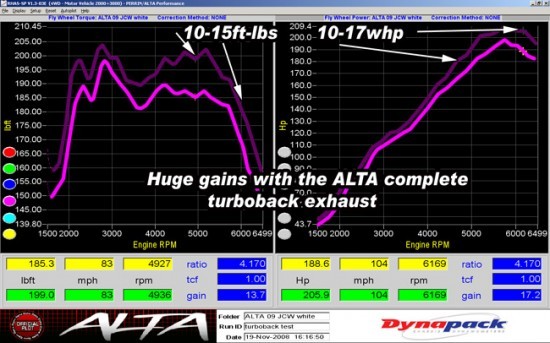 Above is the results we got with installing the turboback exhaust on a stock JCW. The gains are a little lower than we had seen before on the early R56, but still very good.  The things you can't see on the dyno is how much more responsive the car is. With the large 3" Stainless Steel tubing and the significant drop in back pressure, the turbo spool time is greatly reduced.  Also re-spool time between shifts is another place you really notice it. One more thing you can't see with dyno graphs is sound. Finally this 09 JCW sounds like it should, mean and fast! In conclusion, every part by them selves works very well, and makes a noticeable difference.  But as we had seen on the newer cars with somewhat limited boost, they don't all add up the same. So from start to finish, our Mini started at 197whp peak, and after all the parts were bolted on we ended with 217whp peak.  This is only a difference of 20whp peak, the real difference is seen before and after these peak numbers and the overall drivability.  The car gets to a point and the difference they make becomes less and less.  What this car is really crying for is a way to turn up the boost and put those parts to use.  As we had teased earlier, here is something you can expect to get in the near future with your 09 JCW... 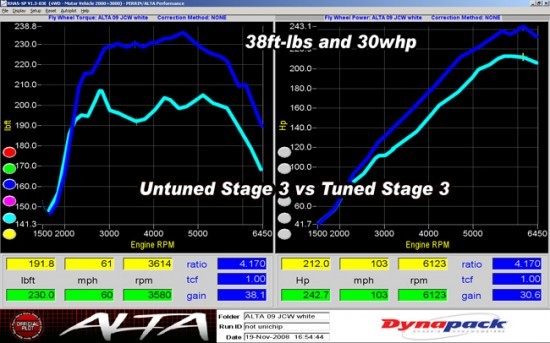 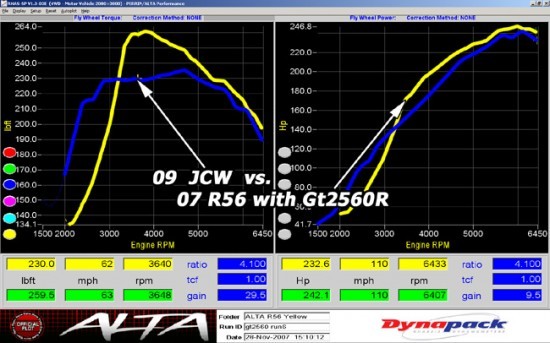