There is not much to brag about, but, now that i have your attention, lets see what these new STI's put down! 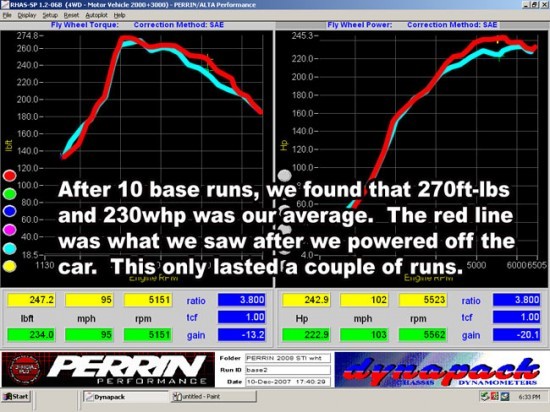 The first couple runs showed about what we would expect to see. Most STI's put down about 230-240WHP, and we were right there. Same with torque, we were pretty close to what everyone sees. Few things to note, redline is 6500, not 7000. WHAT?? Well that is simple, Subaru only needed to make the 305HP mark and it doesn't need to go the extra 500 RPM to get there. If you look at other peoples dyno plots on a stock car they peak around 6000RPM. I am not saying that it can get some more power, or better shift points raising the redline, but that is my guess why Subaru did that. We have 92 octane here, and as many know the stock ECU programing loves race fuel, higher octanes, and water injection. Water injection is definitely something we are incorporating in our futures plans with this car. You will notice on the graphs that there are 2 lines. 11 of the 15 runs were just like the lower HP line. This is what we are using as our base power and tq numbers. The other 4 runs were where the ECU was happy, and was running zero knock retard and adding a couple degrees. These runs only happened right after we turned the ignition off, and did a run. With the 15 runs we did, we tested the I-drive stuff out. Like in the LGT spec-b, it does effect how the car feels, but does it effect power?? Not a single bit! I expected differences in low end power, but nothing! Boost was the same, power, tq, boring!! The only thing I-drive does is change the throttle position vs. the accelerator position. Which does effect low end power, but only in normal driving conditions. When it comes time to tune these, being able to change maps with the poke and twist of a button will be very cool. We tried Deltadash to see if we could log some data, and to my surprise it worked, and showed the one thing i was most interested in. The Exhaust AVCS! Not that everyone knows, but the new 2008 STI has AVCS on both the intake and Exhaust cams. The intake is advaced at lower RPM and load, but turned off at higher RPM and load. The AVCS for the Exhaust cam is a little different, it is not advanced, but retarded. Under load, the Ext cam is retard the whole time, ranging from 20 at low and increases to 30 in the midrange, then back to 20. The only time it goes to zero is under normal driving. The question is, when we can tune this, where will it help make more power? Just to make things clear, this is totally stock with a whopping 40 miles on the clock. We went from the dealer, took an hour drive, and rolled right up to the dyno. A little history on the Dynapack and how it is setup. Many people run the cars in 4th gear, at for 12 seconds. Because of our big plans with this car, we started in 5th gear, and run it for 14 seconds. Both of these factors play into the actual HP and TQ numbers by lowering them. We could have made the dyno read a bit higher, by changing to 4th gear, or making the run shorter, but for tuning purposes, and future part comparos, this is what we decided on. I know you all are thinking, shut up and give us more data and pictures! We just got the car a few hours ago! What more can you expect! Look for lots of info tomorrow! 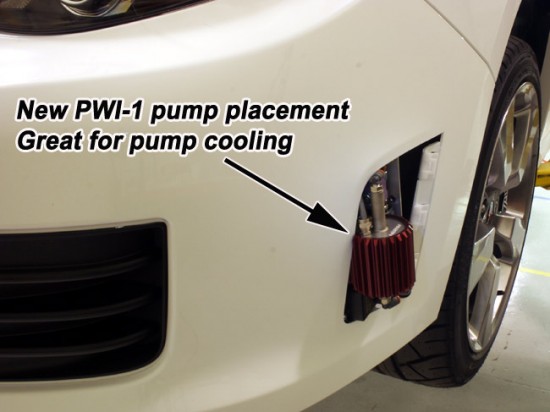 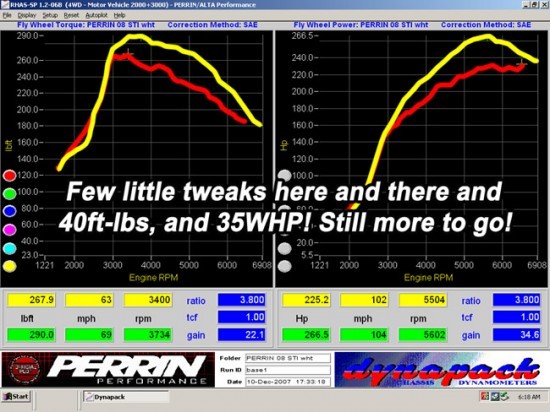 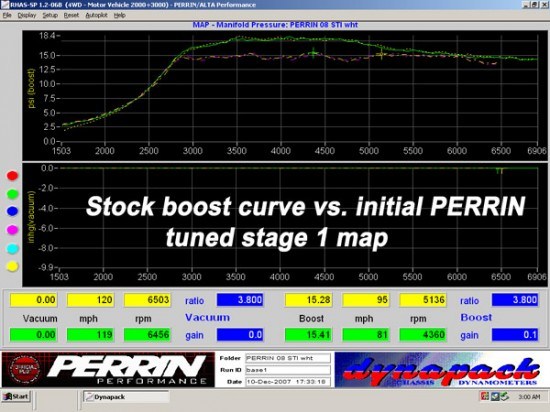