I know, we have been sitting on this info for a couple weeks and its been burning a hole in my head holding onto it for so long!

So we know that the auto ECU has the same pin out for the Unichip to work. But we were a little unsure that the Unichip will work well with the auto tranny. Too much power, or a trouble light from signals being changed, or who knows. On the dyno, we needed to establish a good base line, and establish the proper way to run it consistently. Obviously running it in manual mode was necessary, and 3rd gear worked the best. But because of how the Tranny Control Unit works, we couldn€™t floor it below 2000 RPM with out it down shifting. Also if we floored it to far, you could feel the pedal hit a switch, which would also cause it to downshift. So after a little learning curve with the auto, we got very consistent runs. (which are the Blue lines on the graphs) To me all these things are strange as I rarely drive automatic tranny cars. As with any automatic tranny car, there is more drivetrain loss when compared to a manual tranny. So on the Mini, how does this effect the Wheel HP? Actually not much! Our R56 test mule made 175-ish Wheel HP and 210ft-lbs of peak torque. Below is a graph showing the results of a catback test we did, but also it shows the stock power level. 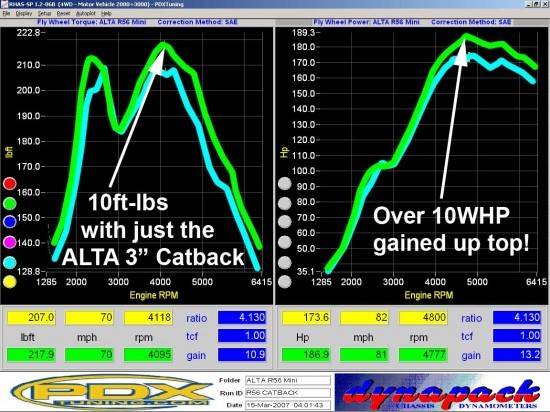 Graph showing R56 manual tranny stock HP and HP with ALTA catback With some base runs done, we consistently saw 175-ish WHP and a much flatter 180ft-lbs of torque.  This car was not totally stock, it did have an intake system and turbo inlet hose installed.  These parts have been shown to add roughly 15WHP beyond stock which means the auto is at a pretty good disadvantage over the manual.  We could guess that a stock Auto would put down 160WHP, and 165ft-lbs.  But all we can do is guess until we get another auto on the dyno.  If you look a little closer at the HP difference at 4000-4500. At these RPM€™s the manual makes about 30 extra HP. In this area, you can see where the Auto starts to suck some of the power from the engine. This could be partially due to the torque converter not being locked up, who knows??  Now that we got the bad news out of the way, lets look at the good things! A semi local customer Gary Simpson is the Mini enthusiast letting us use his car to do the testing and tuning on. While many Auto owners are not into the performance aspects of their car, Gary is not like the normal auto customer. Gary wanted the same setup like our shop car (previous to the GT2560 turbo kit) including a Unichip. So after we did some base line runs, it was time to put on all the parts. After about 5 hours of work, the ALTA boost tubes, FMIC, Turboback exhaust, and Unichip were all installed and ready for the dyno. With the testing on the manual with our full list of parts installed, we would see about 200WHP and about 230Ft-lbs of peak torque, or a gain of 25 peak WHP, and 30ft-lbs. The same parts installed on the auto gained roughly the same HP and TQ. If you look at 4000-4500 RPM there is a 30ft-lbs, and 30WHP gain there. The only difference is the peak numbers are lower. What is important here is the difference from one to the other. Below the purple line shows the power before the Unichip was tuned. Next up was the Unichip. Before we loaded on an existing map, I did a little playing to see how the auto reacted to more boost, and more power. After some playing I loaded on our base stage 3 mapping. Car ran the boost it was supposed to and it was pretty happy. This mapping is the slightly detuned Stage 3 mapping we ship with all our Unichips that are to be used In areas with 92/93 octane fuel. This showed about 20WHP gain, and about 30ft-lbs, just like we advertise. But we wanted to do some custom tuning to see how the car would react to a little extra ignition timing, and a little leaner fuel mixture. After we were done with the custom tune, we were left with an aggressive map and a good daily driver map. Both were tuned to about 20PSI falling to about 14psi at redline. All this netted about an extra 10-12WHP and about 20ft-lbs. 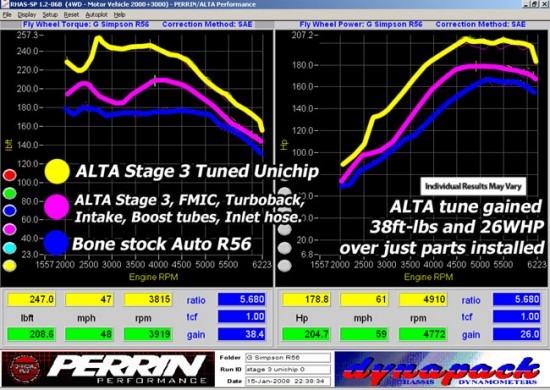 Dyno graph showing R56 auto w/intake and Inlet hose, Stage 3 form (no tuning), and Stage 3 form with ALTA tuning. From all this testing, we learned that the Auto does have more drivetrain loss than the manual tranny cars, but the gains are about the same as the manual. The Unichip works perfectly fine on the Auto, and it also sees similar gains as the manual sees. So all you Auto guys should feel pretty comfortable buying any of the ALTA R56 products and not have concerns with the tranny. Then secondly, the Unichip is now a solid viable option for you! I know Unichip has had some issues with the plugs, creating temporary/intermittent connection with the ECU, and we just released all this great info to get the Auto guys and gals excited about the Unichip. But we are happy to announce new ones are a couple weeks away from showing up. So while there is a slight delay in everyone getting their Unichips, we feel, (as does Unichip) that these will be 1000% better, and all 100% tested before they leave. Thanks again to Gary Simpson for letting us use his car a test mule! Hope he still loves the new found power!