Sticking with the theme of free flowing and 2.5" tubing, the next restriction in the exhaust system after the catback exhaust is the Front Pipe for the BRZ. For all you STI and WRX fans, think of this as the downpipe for the BRZ.  Looking at the diagram below, you can see the Front Pipe is after the header and over pipe, but before the catback system.

The Front Pipe consists of two flanges, a catalytic converter, and a strange rectangle  resonator. The tubing used is 2.118" OD which is close to 45mm size. The biggest restriction with this piece is the catalytic converter, then the tubing size, both of which we will fix. The other thing is the weight. The stock front pipe weighs 12.2lbs, where our PERRIN Front Pipe weighs 6.6lbs with no cat and 7.2lbs with a cat. If you add that weight savings and the weight savings of the catback exhaust, that removes about 18lbs from the car.  That is a reasonable weight savings and after we show you the HP it gains you will see even more value in the part. 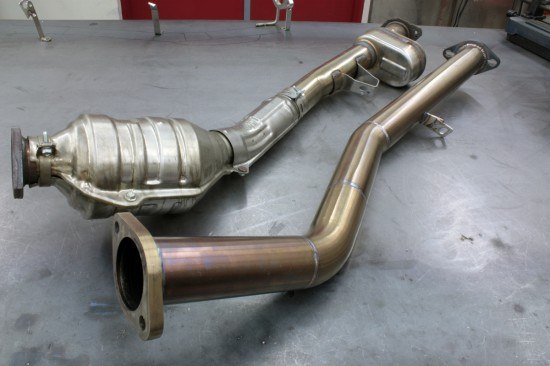 Here are a couple of installation pics of the prototype. You can see its very simple and a nice straight shot from the over pipe to the catback. 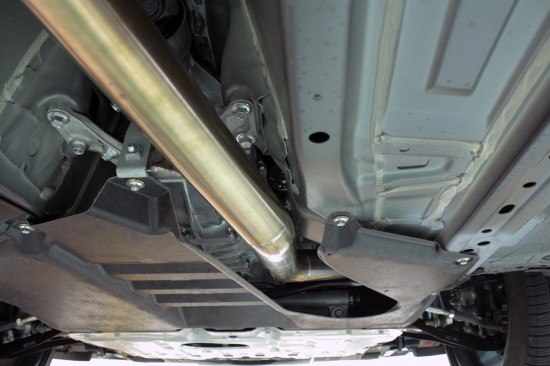 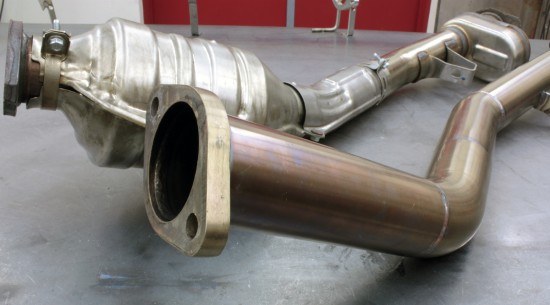 Anytime we make a part, we have to consider how easy it is to install. This part is pretty much as easy as it gets. 2 bolts at the over pipe, 2 bolts at the catback, and one hanger bolt. This is a 10 minute job for anyone with a jack and jackstands. 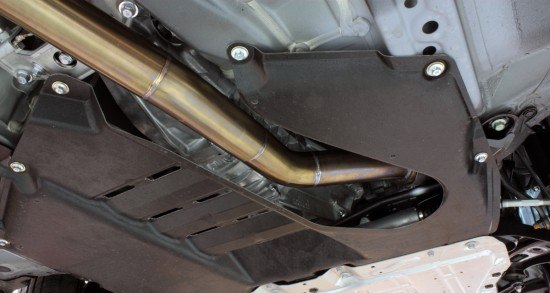 This was the the third part for us to dyno test. First being the muffler delete, then the catback. This part was built the follow day after the first test, so the car has sat for about 12 hours. We did another set of 4 base runs before installing the front pipe. The first thing I noticed (before installing the prototype front pipe) is that it had lost some HP. This day was hotter than the last by about 10F,  and based on some of other findings,I think the ECU has a limit of increased TQ or load. 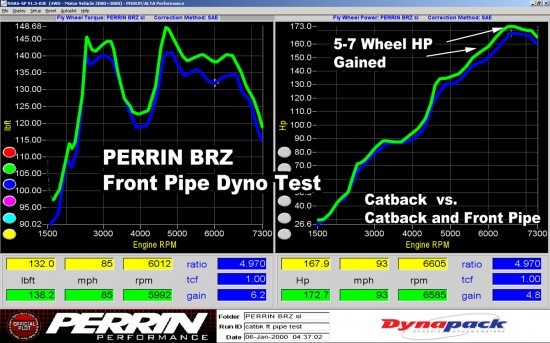 These results were very repeatable. We did about 5 more runs all showing the same 5-8 WHP.  This dyno session was done with our catless Front pipe, and a test with the catted version will follow soon. Overall this is a great sign that this part makes HP, but it also might be showing we may be hitting a limit in the ECU that won't allow more power. Commonly, ECU's have limits like load limits, or torque limits to help control horsepower.  This sounds silly, but its a way for Subaru/Toyota to protect their engines from making too much Torque/power. Remember back in the old days where your car was faster when it was cold out? ECU manufactures put in load and TQ limits to help make the car the same power all the time.

Here are a couple of videos we put together that show off the overall sound of the PERRIN Catback and Front pipe both installed at the same time. These are the same ones we showed in the Catback post. In case you have not seen them, here they are!

We have now proven that our catback and front pipe both make great power. I really think that there is much more HP to be unlocked with some ECU tuning. Expect to see all our parts re-dynoed after a tuning solution is released.