Just to recap again.  The ECU Tuning device here is not a supported item and again this info is provided to show customers how we strive to be the first to tune these cars and get more experience than any other tuner.

Time to put that exhaust to the test!  Last time we left the EVO X progress we had a nice and shiny turboback exhaust all done and awaiting testing. 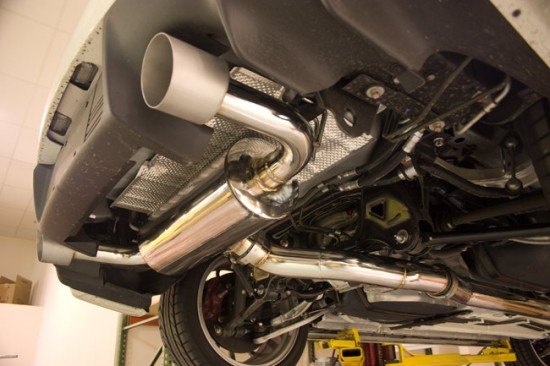 So before we do anything, we are going to run the car a few times to make sure our power is right where we left it.  While our power was exactly the same as it was when we last left it, we experimented with the Unichips Closed Loop boost control.  In fact it worked very well!  For some reason, the Unichip guys don't like using this but once setup it provide a slightly better response time, and after we pulled the car off the dyno it was much smoother and much better power delivery. Anyway, so we started with the same power, but better boost control that can not account for different load in differnet gears. 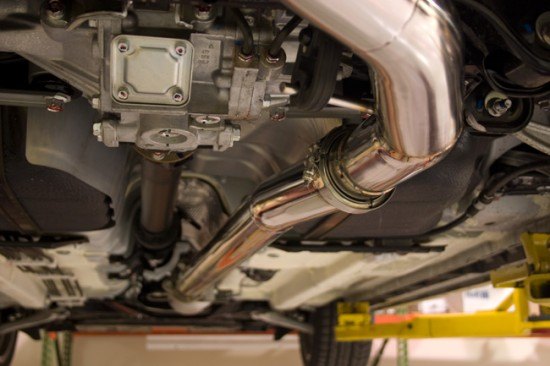 First up is the catback exhaust. The catback exhaust consists of 3" 304SS tubing along with a unique center inlet muffler.  The OEM type of twin tip setup is used but with much better fitting 4" tips. On previous test we have done on stock EVO 8 and 9 we saw about 15WHP by bolting them on. On this test it would be a little different as our car was still in Stage 1 tune. So running more boost, and running 50WHP more than stock.  My expectations are its going to make power, but not that much as we are getting close to maxing out the turbo. 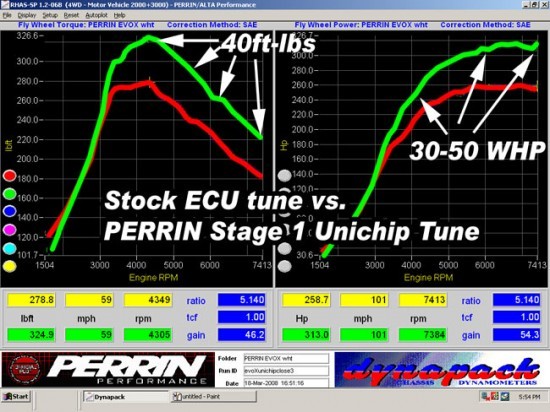 Here is a graph to show you where we left the Unichip Tuned Stage 1.

I was very surprised to see the gains we saw!  We saw 20WHP in some parts of the RPM band, and a pretty good average of about 10WHP.  One really cool thing, as we expected, was the turbo spooling a little quicker.  This made for about 50ft-lbs of torque gained at 3000RPM. 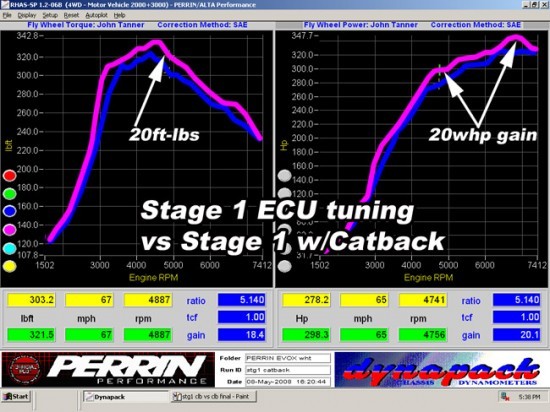 Same tuning as we left the car in stage one form, only the catback installed

We left the Unichip and did no tuning, and as quick as we could we bolted on the 3" downpipe and 3" high flow cat pipe.  The most interesting thing is peak power didn't change much nor did peak torque. But the power was much more smoothed out, and much broader power gains were had.  Meaning, we still got 20WHP, but as you can see below the area of 15-20WHP gained was much larger. 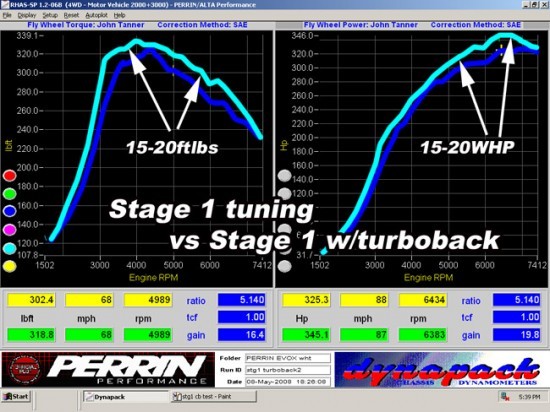 Same Stage 1 tune, but with our full turboback exhaust installed

Same goes for torque.  Similar peak torque gained, but much broader.  The downpipe and cat allowed the turbo to spool even quicker which made the TQ at 3000RPM go from about 240 to about 300!  That's 60ft-lbs of torque!  So far so good, and now it was time to tune! 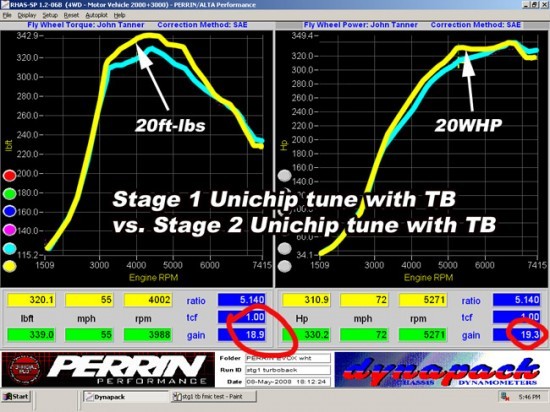 Now we tuned the ECU after installing the parts, and got a few more HP everywhere

The ECU tuning was worth about 20WHP in the midrange, and great TQ at lower RPM, but still the same power up top.  But again much smoother power delivery.  If we compare Stage 1 tuning vs Stage 2 with the turboback installed, the gains are still very good! Look at the TQ its huge! 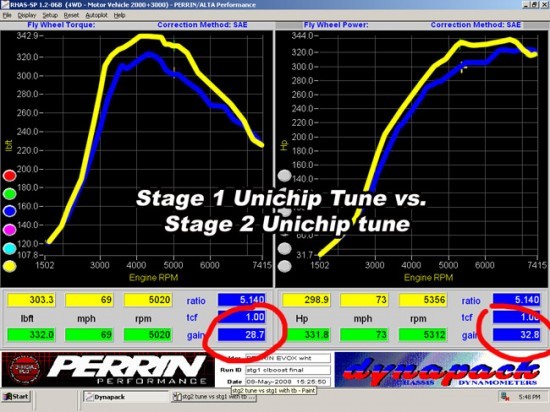 Stage 1 vs Stage 2, not hard to see the difference

The Stage 2 setup vs Stage 1 setup are worth about 30 Peak WHP and about 30ft-lbs of torque.  And all this with no loss in power! Maybe this EVO can have some low end grunt?  Both the Stage 1 and Stage 2 setups are something we are going to be offering so keep an eye out for them.  So far the Piggyback ECU is actually working very well.  At this stage of our EVO tuning we have a couple cars running around with it, and so far so good.  Now its time for Stage 3 tuning with the FMIC. But first we have to prove the FMIC........