By Perrin Performance Jan 31, 2013
Category : ECU Tuning Back to Blog

All PERRIN Custom Tune ECUTEK Maps have built in map switching. This feature allows us to create one tune that has multiple features built in, that are selectable by the end user. With the ECUTEK ProECU software we are able to select the different maps using the cruise control stick. This allows for (4) total maps to be selected by simply pulling back on the cruise stick and push it up and down to change maps. The ability to change maps quickly and on the fly is a very useful feature as it allows for things like Launch Control, Flat Foot Shifting, Auto Blip Downshift, more ignition timing,  leaner AFR to all be changed on the fly!

How Does It Work?

To enable the map switching, first pull back on the cruise stick (toward the driver) for about 4 seconds. You will see the tachometer change to 1000 indicating map 1. Push the cruise stick up to select map 2, and the tach will go to 2000 RPM and same goes for map 3 and 4. Push the cruise stick down and you will change to the previous selected map. When you are finished choosing the map you desire, pull the cruise control stick back one more time and that locks in the map. Its as simple as that! 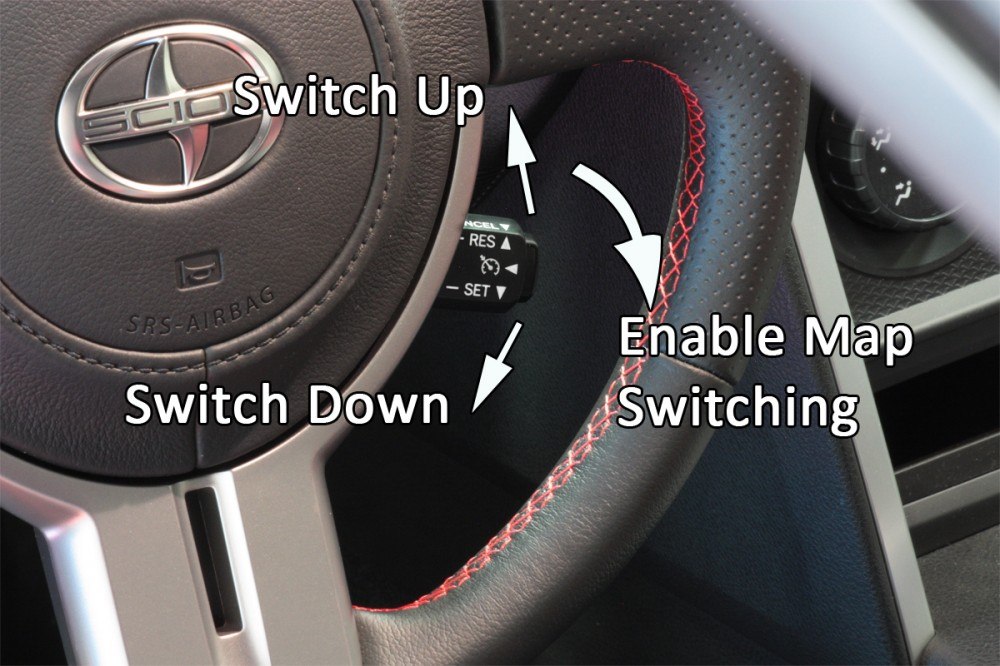 What Are The Features And How Do They Work?

The most requested feature is launch control. This is an alternate RPM limit that is activated when the vehicle is NOT moving and the clutch is depressed. After quickly giving the engine full throttle, the launch control (LC) RPM limit is enabled and RPM's will hold at a preset point (example 3000 RPM). As soon as the clutch is release and the vehicle speed raises, the RPM limit now resorts back to the main RPM limit  (Redline or 7500+ RPM).  This allows for consistent launching while doing drag racing. While LC is enabled and working, the actual launch RPM can be adjusted by moving the cruise control stick up to raise the RPM, or down to lower the RPM.

Another really cool feature we utilize is Flat Foot Shifting. Flat Foot Shifting (FFS) is something that goes by many names, but they all do the same basic thing. When FFS is enabled, this means that you can be at full throttle and shift to the next higher gear without having to lift your foot off the gas pedal! This has a lot of benefits, but mainly its that it maintains speed during shifting. It also allows for faster and smoother shifts, which all leads to faster lap times. FFS is enabled any time the engine is at full throttle, and the clutch gets depressed. The ECU looks at the current RPM and cuts the fuel until the RPM drops to match the next gear.  For instance, if you are full throttle in 3rd gear at 6000RPM and you push in the clutch (keeping your foot full throttle) the RPM's will drop roughly 1000RPM to match the next higher gear. This feature works from 2000RPM to redline. That means you can give the engine full throttle at 4000RPM in 2nd gear, shift to the next higher gear and the ECU will drop the RPM's to match going into 3rd. So it can be used in all situations, not just shifting at redline.

Lastly is the Auto-Blip Downshift feature to help with decelerating and changing to the next lower gear. When Auto-Blip Downshift (ABDS) is enable, it helps with blipping the throttle to raise the RPM to better match the next lower gear while downshifting. Normally this is done using the Heel-Toe method of downshifting, where you have your right foot on the brake and gas at the same time and while you are braking, you roll your foot over to the gas pedal and give it a blip to raise the RPM's up.  ABDS is setup so you just need to use your right foot to brake with and the ECU does the blipping. With this feature enabled, it is activated when your foot is pressing on the brake, and then you depress the clutch to downshift to the next lower gear. The ECU will automatically blip the throttle to raise the RPM to match the next gear. It does not work if you press in the clutch then hit the brakes, only if you hit the brakes then operate the clutch.  Example of this working is say you are at 4000RPM in 4th gear and you are approaching a turn that requires 3rd gear. As you apply the brakes, then hit the clutch and start to shift to 3rd gear, the ECU raises the RPM to roughly 5000RPM to match the next lower gear. As you release the clutch in 3rd gear, the RPM's will be matched and you will be able to smoothly accelerate through the turn.

Other features we can add are things like changes to fueling and ignition timing. This allows us to add or remove HP from each map. With 4 maps and the ability to run different igniting timing between them allows us to add more timing or remove timing which effects HP. Same goes for fueling changes. We can lean out the fuel or richen it up to effect overall HP. What we normally find is that everyone wants the most power, so these features are left up to those that want to change HP with the flip of a switch. We can easily remove 20 HP from our base map by changing both fueling and timing.

How Does PERRIN Setup Each Of The (4) Maps?

As you can see, we have the ability to setup each map in may different ways, but we have narrowed this down to 1 main version that we feel will cover 99% of our customer base. We can modify these maps to specific customer specs if the customer requests. This may result in an additional charge to the customer. If you are interested in this, please contact [email protected]

What Other Things Can We Do With Map Switching?

The problem is there are a million possibilities! ECUTEK built in custom mapping which allows us to setup our own maps based off most any engine parameter and take that data and do something with it. This could be as simple as turning on a light, or adding a new input for a gauge (like a wideband 02 sensor), or to something like special traction control, or even boost control!  The possibilities are almost endless! With so many options and with such huge potential, we leave most of these things up to customers that need those extra special things for their extra special setups. Custom PERRIN maps using features beyond the 4 maps we setup will be subject to an additional charge. Please contact [email protected] for further info.