It may be obvious to some that you want to keep your oil cool under heavy load and extreme conditions. This keeps your oil from becoming too thin, or breaking down,which makes it less effective and could lead to premature engine wear or even engine failures! Another reason to keep your oil temps down is it keeps other engine components cooler which is good for HP. Until the BRZ/FR-S platform, we never really noticed oil temps playing a role as to how much HP an engine was making.

As an engines combustion chamber becomes hotter, it can become more detonation prone. Detonation or knock, is a bad thing as this not only causes a loss in power it also adds an enormous amount of stress to pistons and connecting rods, which can lead to failures. Controlling your engines overall temperature is very important to longevity and durability under extreme conditions. The BRZ/FR-S controls your engines coolant temp very well, but not the oil temp!

The BRZ/FR-S engine does not have any kind of oil cooling system built into the engine. The only thing that cools the oil down is ambient air flowing around the engine, and the engine block as oil passes by it. Neither of these do a good job of keeping oil temps in check and proof of this can be seen during simple low HP dyno testing. During development of many parts we found that oil temp was vital to making power. As oil temps would raise past 100C (212F) we started to see HP drop. Here is an example of the variance in HP we started to see. 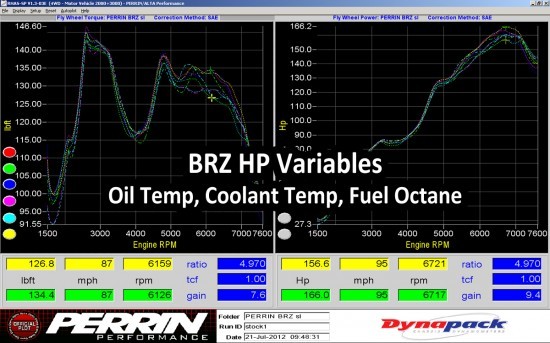 What you can't see very clearly is how the first few runs where the oil was about 70C, it was loosing a small amount of HP. As the temps climbed to 85-100C the HP maxed out and as the temps climbed above 100C the HP started to drop.  For reference coolant temp on this engine is virtually no problem at all. The stock system easily handles added HP. During all tests show here, the coolant temps never went above 92C. The above dyno plot is of a stock FR-S that we were doing base line dyno runs on. You can see a 10 HP swing here. If other tuners or aftermarket part companies don't take this into consideration or at least eliminate the variable, you can quickly make a test for a catback exhaust look really good, or really bad! This is a factor we have to deal with all the time but with the oil cooler this goes away!

What causes the oil temp to raise? Oil pressure and friction are a huge factor. The higher the pressure, the harder the oil pump is working, which means more friction and higher temps. With more HP or TQ from the engine, again more friction is occurring from pistons sliding up and down on cylinder walls, to oil being forced between very fast moving parts. Cylinder head temps also increase the temp. The combustion process is very hot and even though there is a cooling system in the engine, a lot of oil passes by the combustion chamber around the head, which increases the oils temps as well. There are lots of factors that increase oil temperature  and if there is nothing to control this, the temps will continue to climb to dangerous levels and HP and reliability will continue to fall!

With all we had planned to do to the BRZ/FR-S platform, we knew that oil temp would be a huge problem so this is what sparked us to make an Oil Cooler specific to this car. In order to prove to customers that this would be a good/necessary part for their BRZ/FR-S, we had to come up with a test that would be consistent and show the benefits and the actual change in temp.

In the below diagram you can see the difference in oil temp during two different sets of dyno runs. The test was 6 runs with the PERRIN Oil Cooler and 6 runs without an oil cooler, each with 30 seconds of rest between each run. The above graph shows the 6th run of each set overlaid on each other. You can see that the PERRIN Oil Cooler (Blue Line) kept the oil temps much cooler through the run compared to no oil cooler (Red Line). 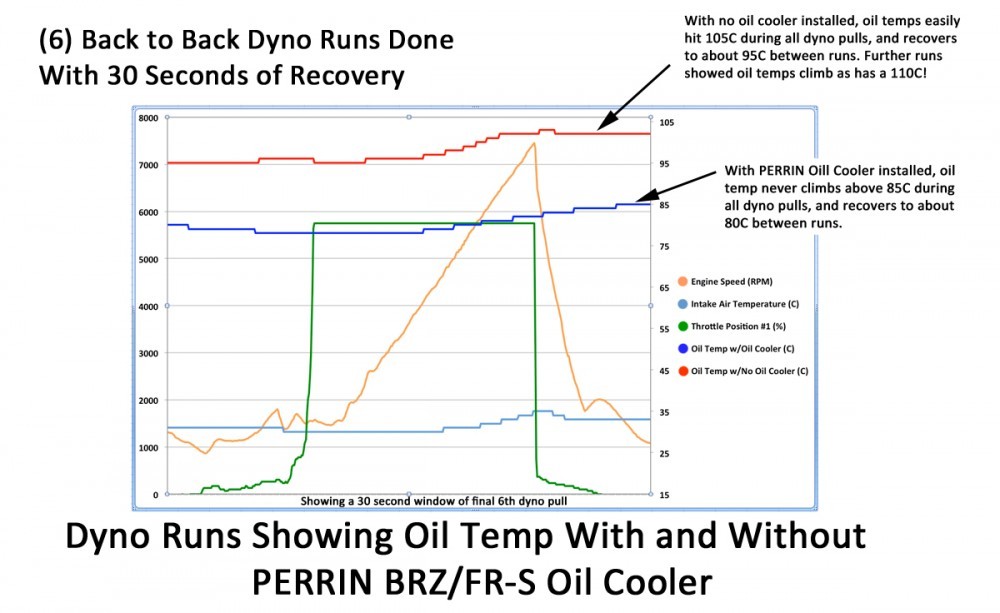 A little more detail about the above graph. This was done with an engine that was warmed up and oil temp sitting at about 70C. We did 6 runs with 30 second breaks between them. The 5th run without the oil cooler showed a peak oil temp of 102C, and during the recovery time it would only drop to about 96. The 6th and final run would show the oil temp climbing up to 105C! I continued to push and do some further tuning, and oil temps would hit 112C after the 8th run and never drop below 103C during the rest periods. 112C is 233F which is very hot and considering this isn't a constant load like you would see on the track or during an autocross, things would only get worse.

The second set of tests were done the same but with the PERRIN Oil Cooler installed. Since our oil cooler has an 85C thermostat built into it, oil temp raised up to 85C by the 3rd run, and would recover down to 80C during the rest period of 30 seconds. From this run to the 6th run and beyond, the oil temps NEVER went above 87C and recovered to 80C during each rest period.  The above graph shows the 6th run overlaid over each other.  This second test was also performed with the car making an EXTRA 80 Wheel HP on top of all that! Meaning the second run with the PERRIN oil cooler had even more stress put on it and even more potential to make for higher oil temps, yet the PERRIN cooler kept the temps perfectly in check.  This was done with a Vortech Supercharger kit installed. One more thing to add, this car made about 20 more dyno runs making 260+ Wheel HP after that 6th run and oil temp NEVER got above 87C! That is amazing and is great proof that the PERRIN oil cooler will easily be able to handle track time, or big HP cars!

Being the first one we ever put into production for PERRIN Performance, we made sure that our kit wouldn't be one of those kits that was a bunch of loose parts you needed to figure out how it all goes together. We make it complete, with full instructions, and easy enough that anyone with a few tools could install. 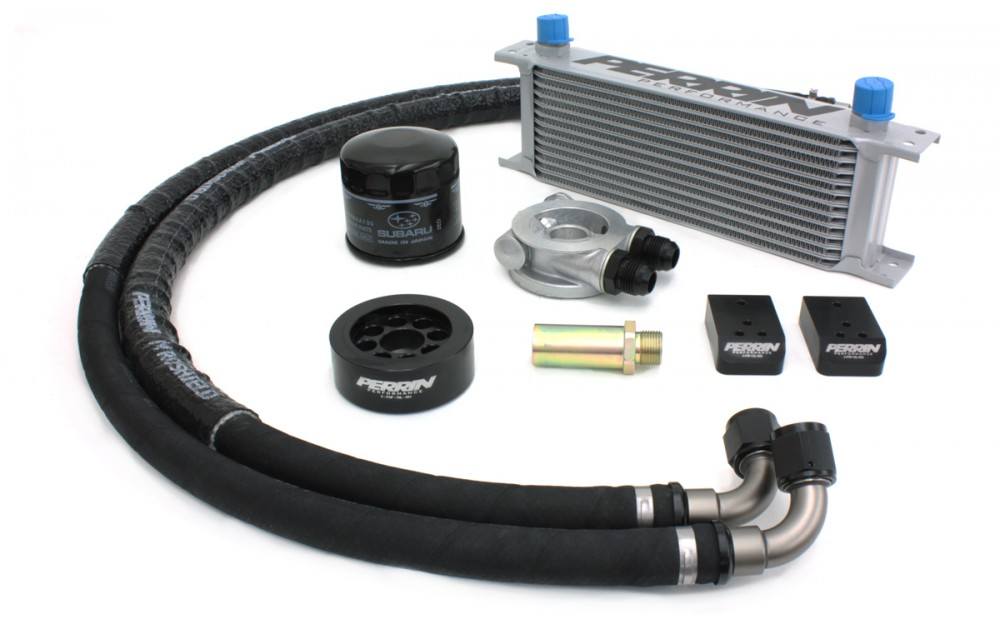 Included with each kit is a heat exchanger that will easily support the thermal needs of keeping your engine oil temps in check, a thermostat controlled oil filter adapter to ensure oil temps warm up quickly, mounting brackets, oil filter spacer, NEW Subaru Oil filter, and -10 pre-assembled oil lines, with -10 AN fittings. Of course some detailed instructions are included. The only special tool you may need is a socket, and an extra QT of oil, then the rest of the items are things you may already have in your tool box. 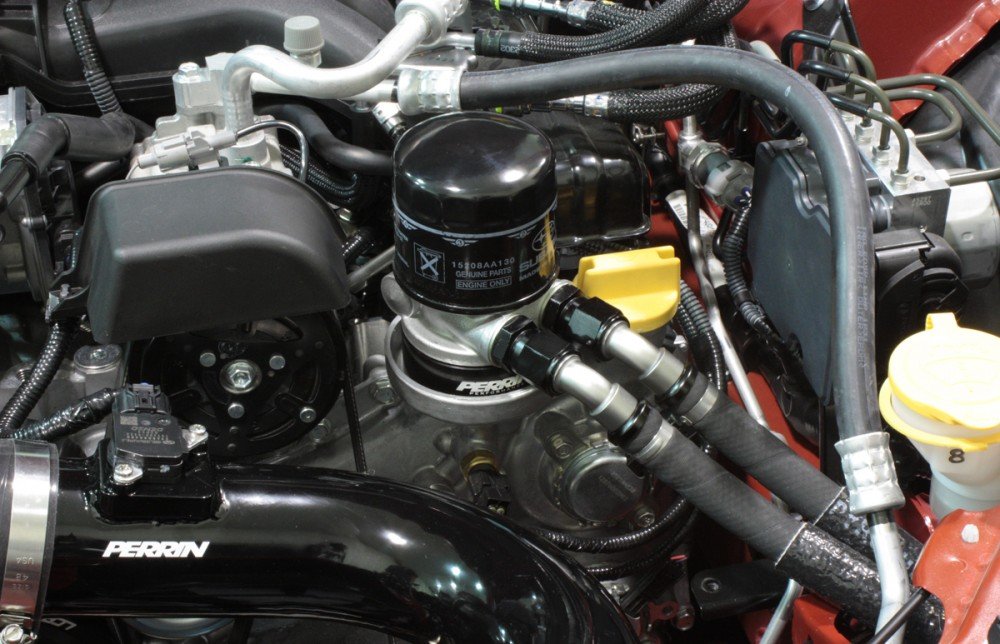 Here is a picture of the oil cooler installed on the engine with a PERRIN cold air intake system in place. The oil cooler is designed that it fits with the OEM intake, and most all aftermarket intakes, including the Vortech Supercharger kit! Routing of the lines is also very simple and works on both BRZ and FR-S models (different headlight passageways). In this picture you can see some of the PERRIN Pyroshield that is covering the oil hose. This is a protective shield for abrasion and wear and tear over time. The PERRIN Pyroshield consists of a fiberglass woven material that has been coated in a thick silicone layer. Silicone provides excellent abrasion resistance as well as the fiber glass creates a strong inner liner that will keep things from wearing through it. 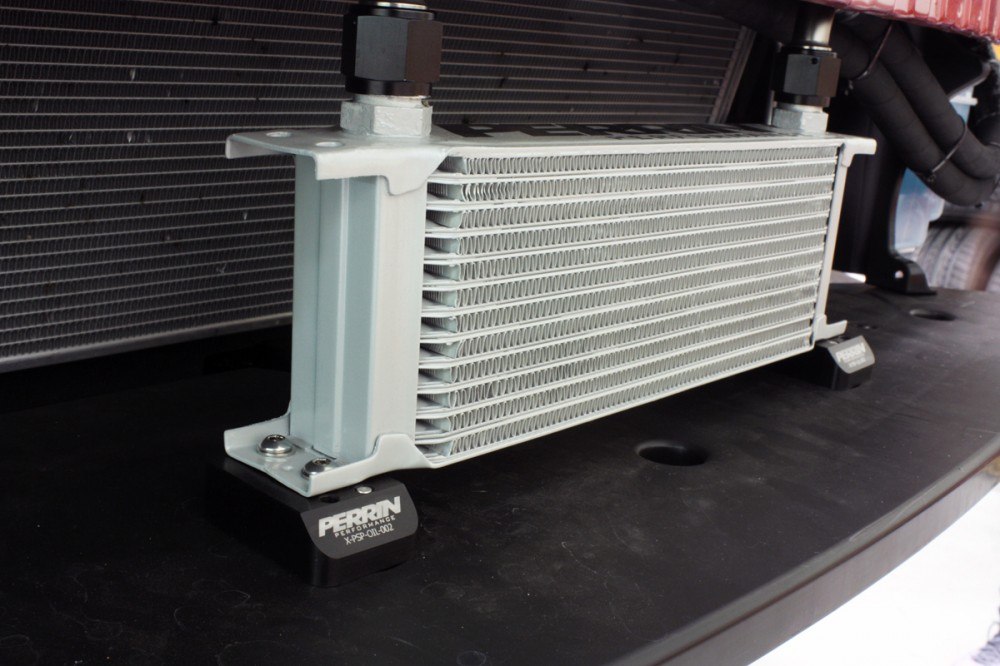 In the above picture you can see the PERRIN heat exchanger mounted to the lower splach guard using some machined aluminum mounting brackets.  These provide a strong base for the core to mount to and also add some really cool looks to the front grill area for those who might peak into there. The placement of our core was designed such that other aftermarket intercoolers would still fit behind our core. This is important as we know our biggest customer for this will be Supercharger kit and turbo kit guys.

How Does it Look?

Whenever we make a part it's very important to make that part functional first then secondly make sure it looks really good on the car. We choose to put the PERRIN core in the front of the car and centered in the middle of the grill. This tells other people that you have something really cool going on with your car. We also choose to center it in the grill as apposed to others that push it off to one side. This leads to a much more balance appearance at the front of the car. 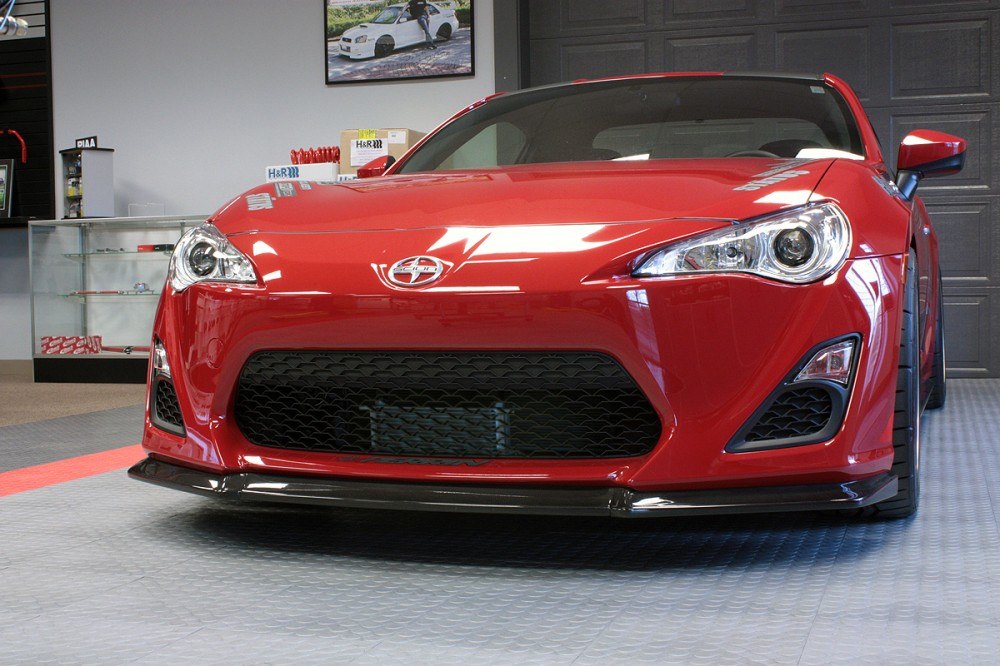 The oil lines are hidden and as you can see looks very fitting for the front of the car.

What we have done is learned that oil temp makes a big difference in how consistent your car makes HP. We have learned that your engines oil temps will get out of control if nothing is done about it, which can lead to loss of power or major engine failures. The PERRIN Oil Cooler will keep your temps in check and your HP consistent , along with adding a huge amount of safety margin car. Consider a PERRIN oil cooler to be one of the main building blocks to your BRZ/FR-S build if you value your engine long term life. 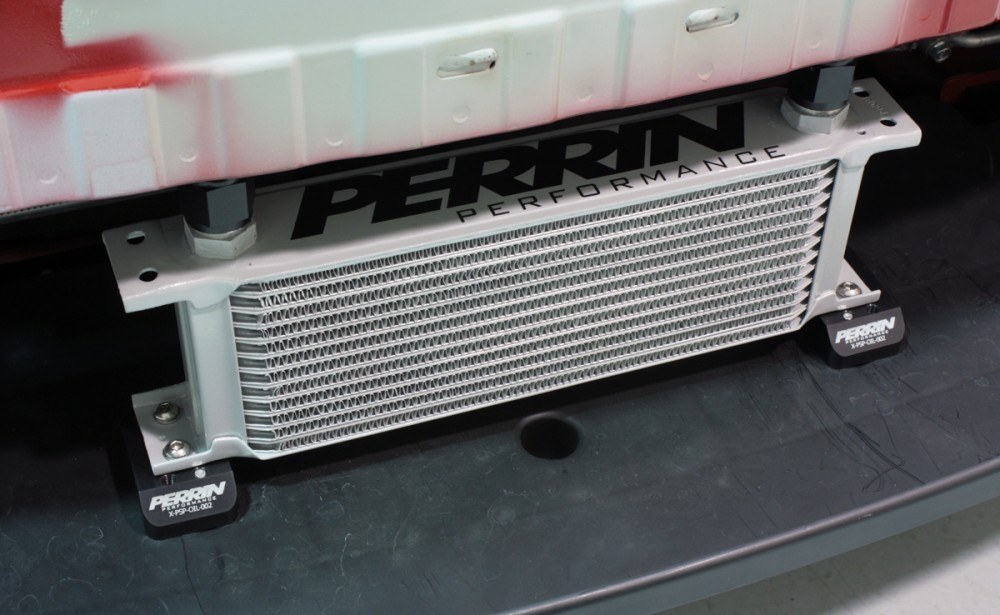 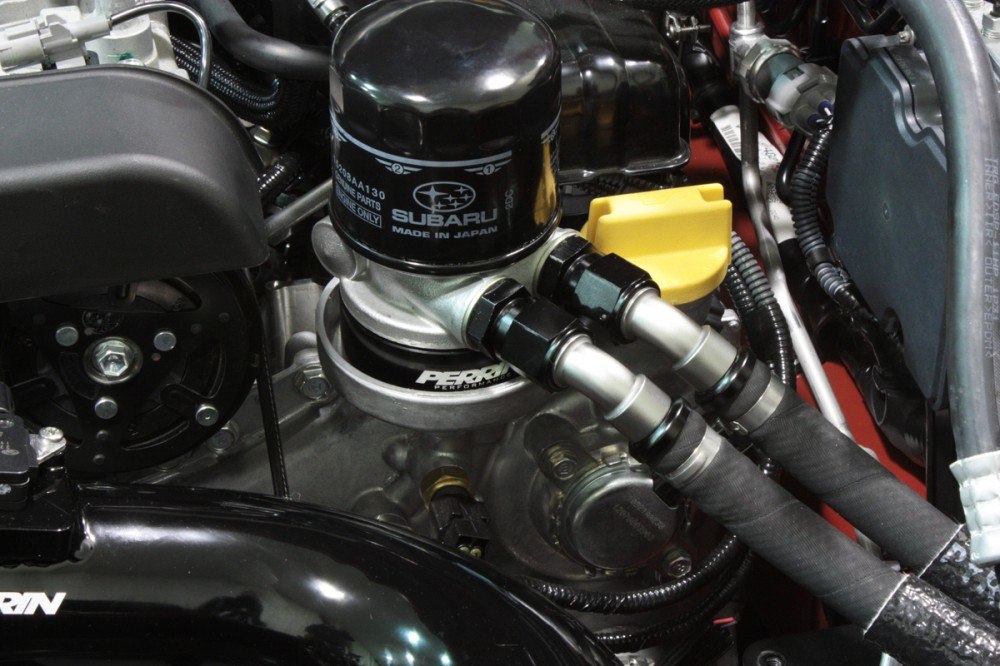