The idea of this part is simple. Stiffen up the engine to reduce the entire drivetrain movement under hard acceleration deceleration and corning, to effectively transmit more power to the ground. This means better, more accurate launches during drag racing and Auto cross type events where you do not want drivetrain slop. It was important to do this while NOT creating something that vibrated the car so bad that no one wanted to ride with you and rip apart like some mounts do. We feel we created a part that is a perfect balance of stiffness without the vibration issues, and one that will not fail.

Over the years we had been pushing the Subaru Group N motor mounts to customers. These were a great inexpensive option to stiffen up the squishy OEM mounts or replace broken 06 STI  plastic mounts. While these were a good option, we started to notice that people were breaking them during drag racing or auto crossing. The extreme amount of force involved during these events eats up these mounts. This drove customers to buy some of the expensive aftermarket JDM mounts, which then customers quickly realized they were WAY too stiff for daily driving. These mounts are virtually solid, with virtually no vibration absorbing properties and would rattle every plastic panel in the car loose. Between stock mounts been too soft, Group N mounts failing, and other aftermarket mounts being too stiff, this drove us to make our PERRIN stiffer motor mounts. 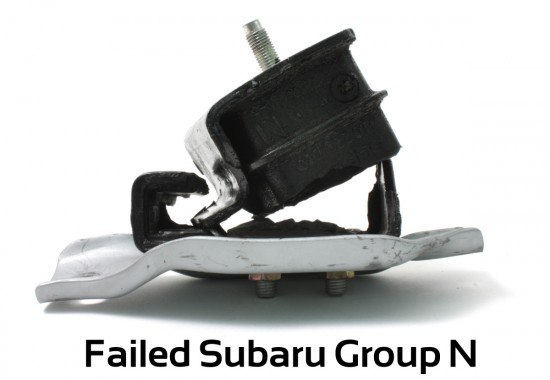 Above is a picture of a Group N mount that has failed. These mounts failed during an Autocross event where the car is launched at 5000 RPM. You can see how this mount (as does the stock) has an interlock design to keep the engine from lifting out of the car too far, but it's not good enough to keep it from ripping the OEM rubber. This particular customer explained that he would go through 3 sets of these mounts a year as none of them would hold up for very long.

Tested with almost a year of use, and with over 100 drag race type launches before release, this mount will not fail you! Part of this has to do with the patented Interlock design. All engine and transmission mounts have an interlock to them but some not as good as others. (If group N mount pic is used) As you can see the Subaru Group N mount (a popular cheap upgrade) can't handle the abuse from racing. At least the interlock keeps the engine from lifting out of the car! 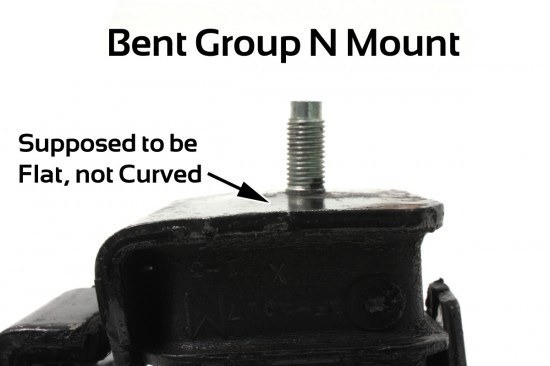 Take a look at this above picture. This shows the same mount, but you can see how the main mounting flange (chassis side) is bent. This is showing that the engine has enough twisting force that it's actually bending the mount before the rubber tears away from it. That is a lot of force!  The next picture shows a stock 2006 STI engine mount (dreaded plastic ones) that also failed. These plastic mounts come on the 06-07 STI's and are very well known to fail on cars with stock HP!

How We Built Them

As you can see, starting off with a base mount that could hold up to the abuse was really important. Besides the stock mounts failing, we have seen many aftermarket mounts that do not hold up to the abuse that racing situations can put on them. To solve this problem we use a patented part made by Energy Suspension which contains a super strong, steel interlocking design with polyurethane surrounding all the part. Using the cutaway, you can see the steel components and how the base interlocks to the upper portion using that "T" shaped piece. Surrounding the steel parts and the inner "T" piece is special 70AS durometer polyurethane. This durometer provides that perfect balance of stiffness and vibration absorbing properties that street cars and weekend racers need. Along with that, the special formulation contains additives that make it impervious to oils and other chemicals that destroy OEM Rubber type mounts over time. Things like small oil leaks, or highly corrosive atmospheric conditions and extreme temps make rubber mounts brittle and fail, where these things are no match for our PERRIN Mount. This means the PERRIN mount will easily outlast the OEM mounts as you will fine no rubber in any part of its construction.With this patented designed mount and interlock design, you can feel good that this mount will not tear apart like OEM mounts. 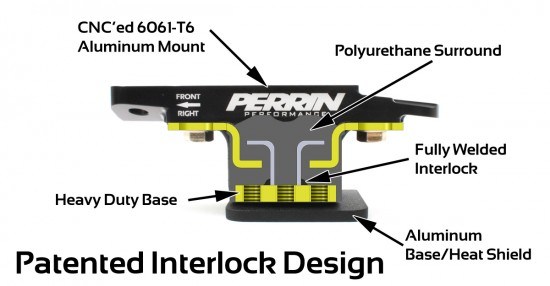 The PERRIN motor mount is one of the few that includes the actual engine mounting bracket with each kit. Most mounts reuse the heavy OEM steel bracket, but we replace this with a CNC'ed aluminum bracket. This makes for a stronger and stiffer mounting surface for our stiff urethane mounts to bolt to. Including these brackets also means that customers with OEM plastic type mounts, do not need to buy additional parts when they go to replace their mounts. 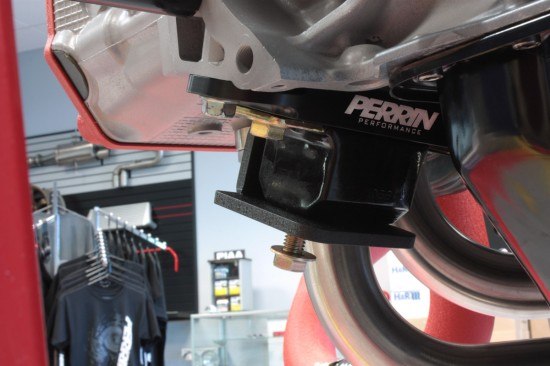 OEM and aftermarket mounts use a stud and nut to secure the engine to the chassis. This stud makes removing and installing the engine into the car somewhat tricky.  The PERRIN Mounts use a bolt in place of the stud which means you do not have to lift the engine up past the studs, or get the mounts perfectly aligned to the tranny and subframe when installing the engine. This small detail was done specifically for the customer who is constantly pulling the engine out to add new part, rebuild, change clutch or any other big engine upgrade. Hopefully you do not need to use this feature very often, but when you do you will love it! 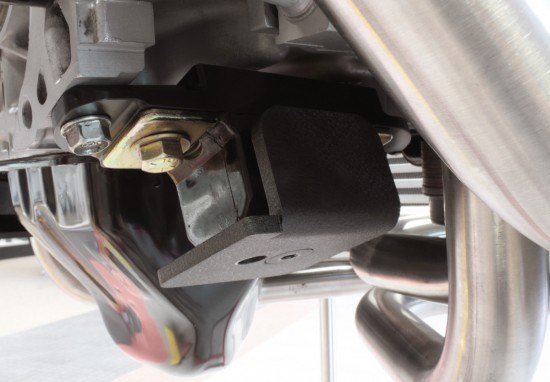 In the above picture you can see the super thick aluminum plate we use to ensure that there was a nice solid / flat surface area for the mount to rest on the subframe. We added the heat shield as precaution against headers and uppipes that run close to the mounts. While the urethane is good to 350F, we don't want them to deteriorate over the years being constantly exposed to extreme heat. 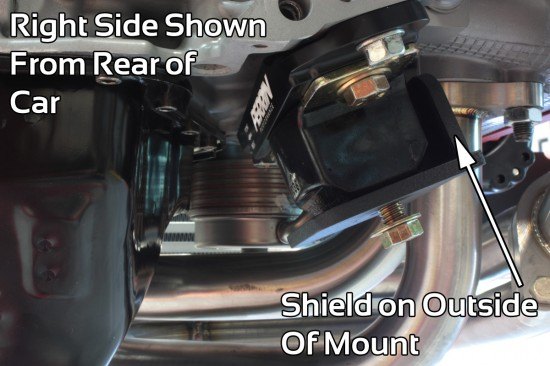 Our Mount is stiffer than your stock engine mounts are, which means there will be some added NVH (noise, vibration, harshness). This is important to mention as we want our customers to expect some new noises coming form their dash and door panels and maybe even some new rattles. Even though this may sound like a bad thing, for most people this is pleasing knowing your engine solidly connected to the chassis, versus having that sloppy disconnected feel from the stock mounts. It gives you almost the same performance as a solid mount but with out the added harshness associated with them.

How do they compare? Most people describe them as being as stiff as the popular Subaru Group N Mounts, but of course will not fail like they do. And everyone says they are much softer than those offered by popular JDM companies or by others that have copied those designs. Its a perfect balance of performance and noise.

Of course this is next on the list of ways to stiffen up your drivetrain. We have been torture testing these as well for a long time and expect to see something soon! Here is a sneak peak! 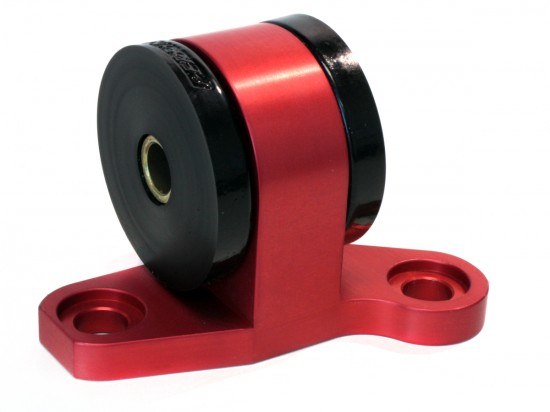