These results are also for a product we no longer support (ECUTEK Flashes), but these results are right in line with what we see on our AccessPORT flashes which is what we currently offer.  Just don't call and ask us for Unichip!!

So what did we change to? ECUTEK!  Its pretty much the only other ECU tuning method out there.  So why did we change?  Well, besides being able to offer a product that is also proven, we could offer a product no one could complain about installation with. The hardwiring of the Unichip leads to quite a few potential issues. All of which could lead to engine failures, and this is not good for anyone! Its not that we had issues with tuning our Unichip'ed cars, but we saw a variant from one car to another with a very small difference in a resistor used to pull down the current from the MAF sensor.  We also didn't feel this would be a 100% repeatable thing, and while we could tune around this on the dyno, we wouldn't be able to tune everyone's car.

Also we can control timing and fueling completely separate from one another.  We could control both before, but changing the MAF signal effects the timing. This also leads to having to trick the MAF sensor and MAP sensor to make sure the ECU didn't hit boost cut. Then there is the one thing I was most excited about, MIVEC control! More on this later!

That feels good to get off our chest... 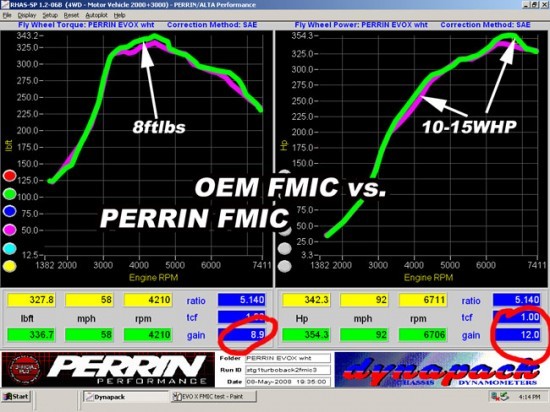 This is where we left our car after our FMIC test. This was our Stage 3 setup, which includes our Turboback Exhaust, and FMIC along with a Unichip tune, or at least and ECU tune.  340ft-lbs of torque and 350WHP, not bad, and very solid feeling!

So before we get to the ECUTEK flashing, what do we think we are going to find?  Well, like when we have people ask us about different ECU's and if there is one better than another, the answer is they all should be able to make the same power if tuned properly. An engine is only going to take so much timing, its only going run so lean, and so on.  So I think the results will be the same, as we tuned the Unichip until we felt it was a safe repeatable level.  The advantage the Unichip has is we used our EBCS on it which means it should build boost better than the stock ECU and hold more to redline. But the ECUTEK can control the cams.  So who will win?

Before we get too deep into the ECU, ECUTEK has both the original ECU rom and the newer updated one. Because we had time, we ran them back to back (well 273 seconds back to back). ZERO difference on the dyno. While we expected to see more boost, or leaner or something, nope nothing.

But an intersted comparo we did.  When we flashed the ECU with the stock ECU rom i noticed the numbers looked very similar to stock...... 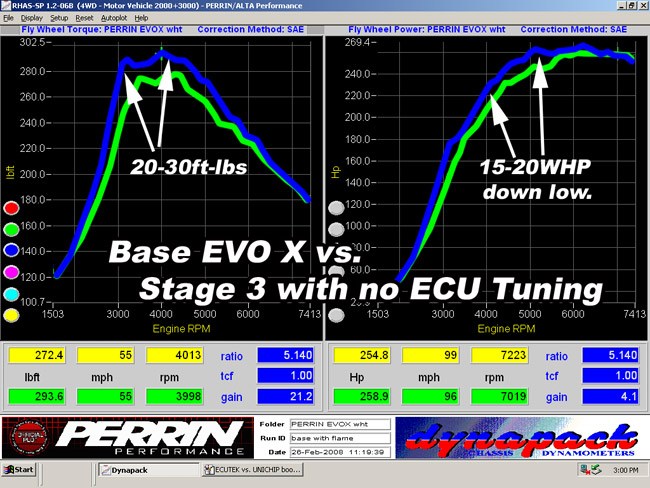 Very strange, but this is showing our car in stock form, versus Stage 3 with no ECU tuning. This means turboback exhaust is installed, with our FMIC.  So why is it not much better? Well the stock parts at stock boost levels work pretty well. But start turning up the boost and then things start to see their faults.  Its goes to show, ECU tuning will make more power for less money than just about anything! 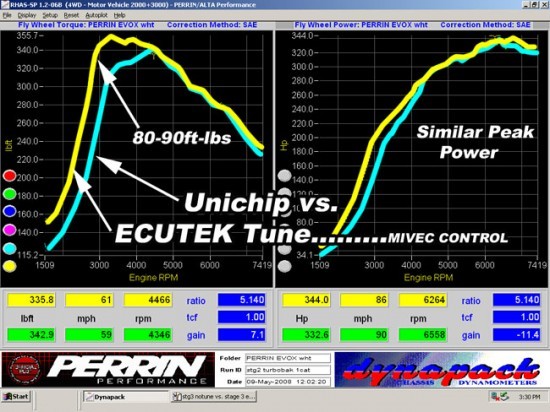 As expected the peak power and peak torque were very similar. This is because the engine was brought very close to its max power in both tuning methods. But where the ECUTEK really kicks ass is with playing with the MIVEC controls.  Its obvious by the graphs how it effects spool and low end power.

Like we did on our last EVO 9 installment, with the Cobb AccessPORT we made changes to the MIVEC map instantly and found where more advance and less advanced worked and made more power.  While we could do this instantly on the AP, with the  ECUTEK every change required a reflash of the ECU. Each flash takes 273 seconds, so the engine can cool of quite a bit here and make it hard to do really good back to back tests when you have to make little changes.  But none the less we did and spent quite a bit of time playing with both the exhaust and intake cam changes.  Its unbelievable how much difference that the MIVEC makes to the low end power.  Look out STI's here comes some low end power from the EVO!

Onto our boost findings.  So its obvious changing the MIVEC tables makes a huge difference in spool, so how much exactly? 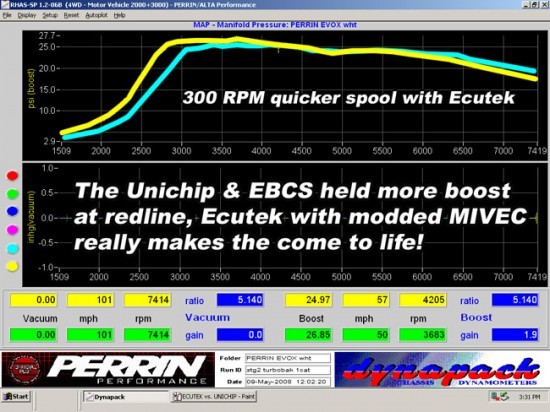 That's right 300RPM!  It is an unbelievably huge difference on the road. This car has much less of that off boost lag. Its like it gained .5 liters of displacement!  The ECUTEK boost curve is actually lower at redline than the UNICHIP. This could be from a couple of things.  The Unichip had our EBCS solenoid installed, which may help.  But also the UNICHIP can't control the cams so some of the increase is boost could be from the "Unichip Trickery" causing the cams to be running more cam advance. Yes too much cam advance can cause excessive boost pressure at redline, but this doesn't mean more power!

One last test we did after we did a few more back to back runs to ensure its repeatability, is we tested another new part. The turbo inlet hose!  This part in OEM form is a rubber hose that is a bit narrow, and the internals are opposite of smooth. The corrugated rubber inner doesn't make for the smoothest air flow to the turbo. So it sounds like its got to make a difference. 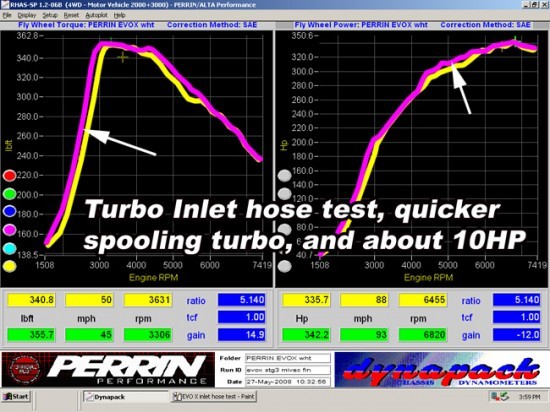 Well maybe not quite as much difference as I hoped, but it sure did help the turbo spool even quicker. What I can't imagine is how much quicker the turbo spooled compared to where we started even before our stage 2 setup.  In stock form at 3000RPM we hit 240ft-lbs and 20psi of boost.  With the final Stage 3 setup with the ECUTEK tuning, we were hitting almost 360ftlbs!  Now boost was hitting 20psi at 2500RPM. That is just nuts!

Without a doubt the ECUTEK software is a much better tuner tool, and to the end user we feel you will be happier with its performance. The ECUTEK flashes are $695 each compared to the $595 for the Unichip in hardwire form. So the ECUTEK is more expensive, but with no hardwiring.  The only thing is we need your ECU to flash it.  Not a big deal to us, but for the end user you will have to send us your ECU or drive by with your car and we can flash it.  If you are interested in dyno tuning give us a ring!

Look for our re-tests with the ECUTEK software and our Stage 1 setup and stage 2 setups.  WE have cars lined up already to prove our maps with and for those interested in a Stage 3 PERRIN ECUTEK flash right now, and have better than 91 fuel, give us a ring!

I know, not too many pics of cars and parts in this article, but at least there are some dyno graphs to drool over!