We last left you with the dyno graphs from the stock 2015 STI and WRX. We showed how the 2015 STI spools slower than the 2008-2014 STI,yet still makes more power by about 20 Wheel HP. We were slightly concerned that Subaru may have really pushed the car with the newest ECU tune and there wouldn't be much for us to gain from an ECU tune.

Cobb offered us an Accessport for the 2015 STI long before they were released to the public. We were lucky to have this offered to us as it gives us something to keep the hype going with PERRIN and the 2015 STI. It also helps us with R&D on new parts we will be offering, and of course its a great way for us to help Cobb with making sure there are no bugs with the software. Also, I felt pretty special getting serial number 2 (#1 went to Cobb) of the new part number AP3-SUB-004! So how did this tune? 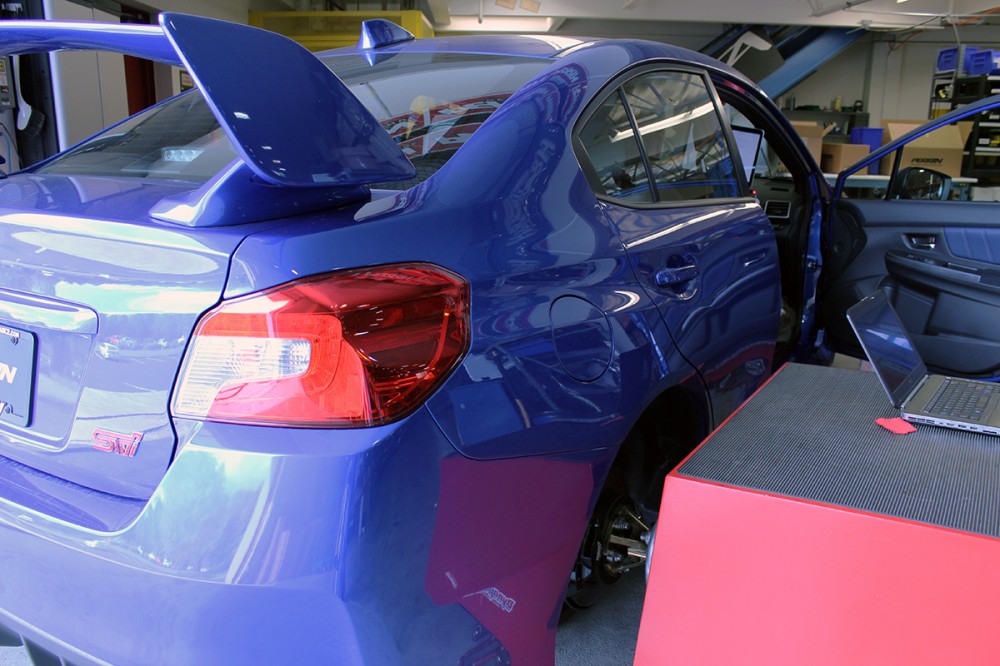 Lance from Cobb came over to give me a few pointers about some of the minor changes in the software and also hand delivered our V3 Accessport. Essentially all the same maps are available to tune on the 2015 STI, but there are a few that changed that simplify ignition timing as well as effect it in different ways. Its not really important for the normal customer, but essentially its all the same, except for that weird added lag and additional HP it starts with.

Staring out the day we did a bunch of baseline runs with out the Accessport installed. This is important as it had been running around on 92 octane Oregon fuel for a couple of weeks. Our car came up with about 260 Wheel HP and 265 ft-lbs of torque. After installing the Accessport and applying some of the basics to the map we saw pretty awesome gains starting to appear. 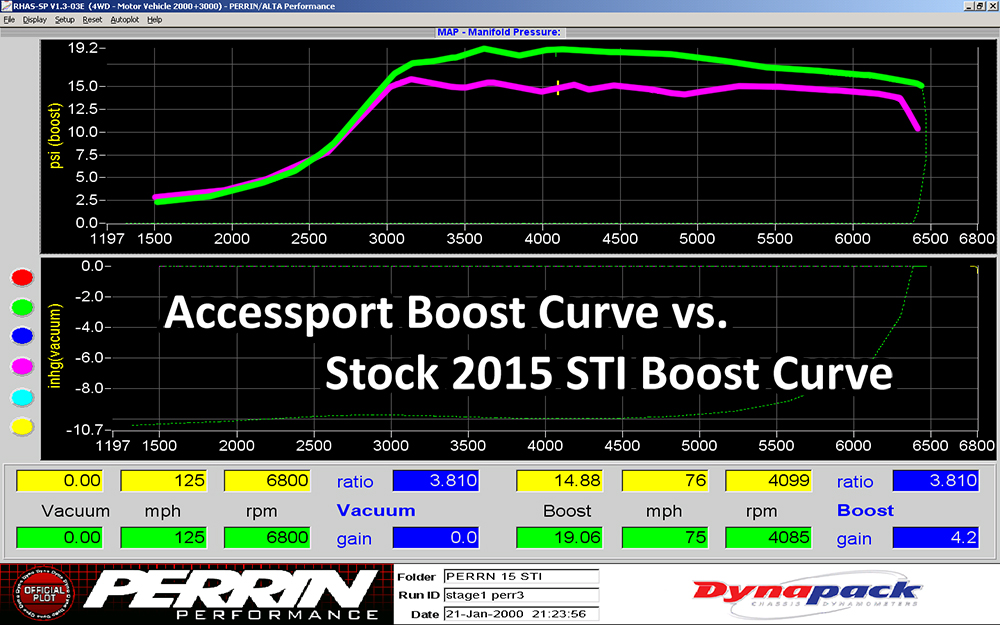 Since we have enough experience to know what kind of boost levels we can run on a stock STI, we stuck to those levels of about 19psi at lower RPM and tapered it off to redline. We quickly saw more WHP than we would see on a normal Stage 1 tune from a 2008-14 STI. Only thing that was different is that we really were not able to gain any more power from about 6000 RPM on. No matter the boost or timing, it just didn't make anymore. Keep in mind this is all done on stock STI. With exhaust system and other mods like an intake, for sure there will be more HP to gain.

After spending about a half a tank of gas tuning, pushing and finding the limits of ignition timing, we did find a few interesting things. As we mentioned before about the laggier turbo, and the fact it was making more HP than older models, we suspected a change to the turbo it self. It is the same turbo part number as found on older cars (VF48), but something seemed different...

Evidence of this can be found with boost levels we can tune to. Older cars is that 14psi at 6500 was always about the most you could get because of the limits of the wastegate  and smaller turbo. On the 2015, I am finding that we can hold peak boost much longer than before and more at redline. The additional 2psi we can run at 5000-5500, really helps make peak power much higher than found on old cars. 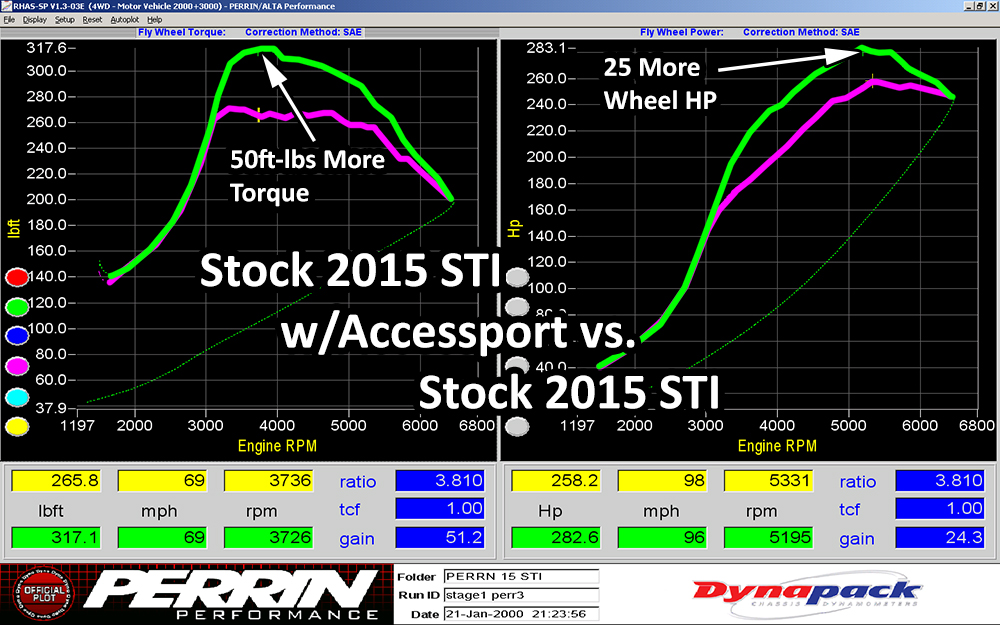 The above graph is NOT the normal Cobb Stage 1 map, but a custom map done on our dyno to our specific car. I am only saying that because the results will vary and Cobb's maps may be more or less HP from here. As you can see, running more boost makes and additional 25WHP and 50ft-lbs of torque. This is exactly what this car needs, just a bit more low end and mid-range grunt.

How does this compare to a Stage 1 from the older STI's? Besides slight loss of low end power from the slower spooling turbo, it does make more power once on boost, and quite a bit more in the midrange. The 2015 STI really likes more ignition timing is which is why there are pretty awesome gains to be had over previous years. 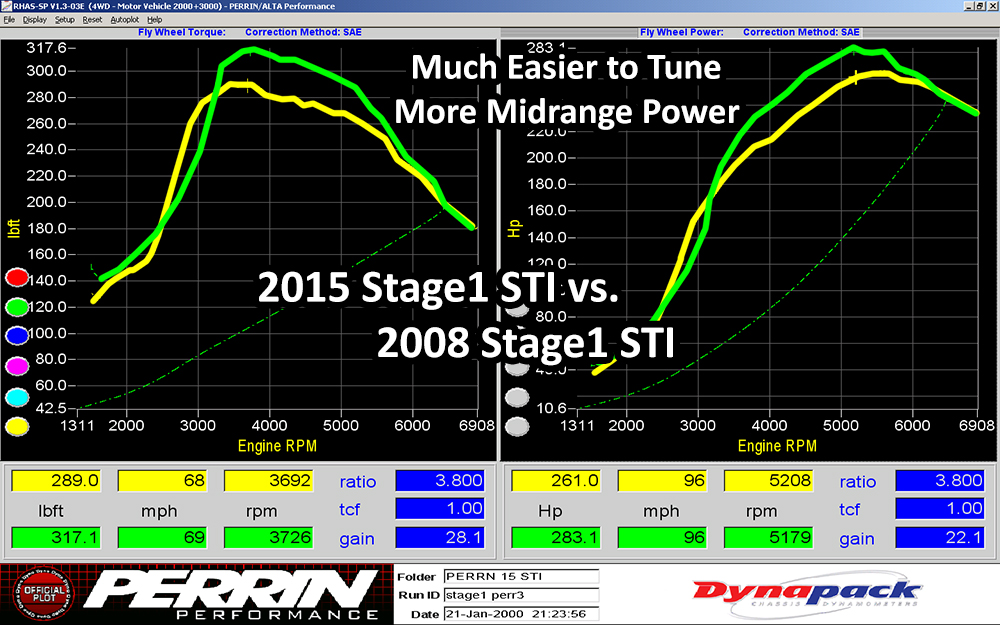 Tuners Aspect of Tuning the 2015 STI

With most new applications for the Accessport, they always find something that Subaru did that is different. It's the small changes to maps that already exist or the additional use of maps that were never used before.  During our testing, we found a few small things that don't really affect HP, but change the tuning strategy.

For boost control related things, there isn't anything that is different. It's still Max and Min duty cycle maps as well as the PI controls. Fueling maps are the same, for the most part. Ignition timing maps are where things change. Subaru has simplified the way it does timing, which is great for us. At the same time, one of things we discovered was a new map that affects timing under certain conditions. This is a map that has existed in years past, but was never used. Other than that, the maps are pretty much the same.

Some of the things I noticed during tuning, was how the ECU and engine acted differently than previous cars. For instance, the "Fine Learned Knock" is much more active and changes run to run. You can get some "Fine Learned Knock" then change the base timing (to correct the retarded timing), and the next run it starts to go away. In previous cars it would take much longer and we would end up resetting the ECU. Also our normal AVCS map doesn't have the same effect as it does on the other cars. I spent a lot of time adjusting the AVCS to optimize spool and power and applying this logic to the 2015 STI (in stock form) doesn't do anything. Lastly is ignition timing. The stock timing from 5000RPM to redline is highly optimized and there isn't much to gain. As you can see from the above graph it just poops out from 6000RPM on. This is also why we didn't run the car past 6500RPM too much as it didn't make a difference. Again this is on a stock car, and that should improve with a few aftermarket parts.

One last comparison for fun. Below you can see the 2008 STI compared to a 2015 STI, compared to the 2015 STI with a custom tuned Stage 1 map. From old car to new car, you can see that there is a lot to be gained from just a tune. Anyone considering buying a 2014 STI should look at this and really think about how much more fun, and faster the 2015 STI will be with minimal mods. 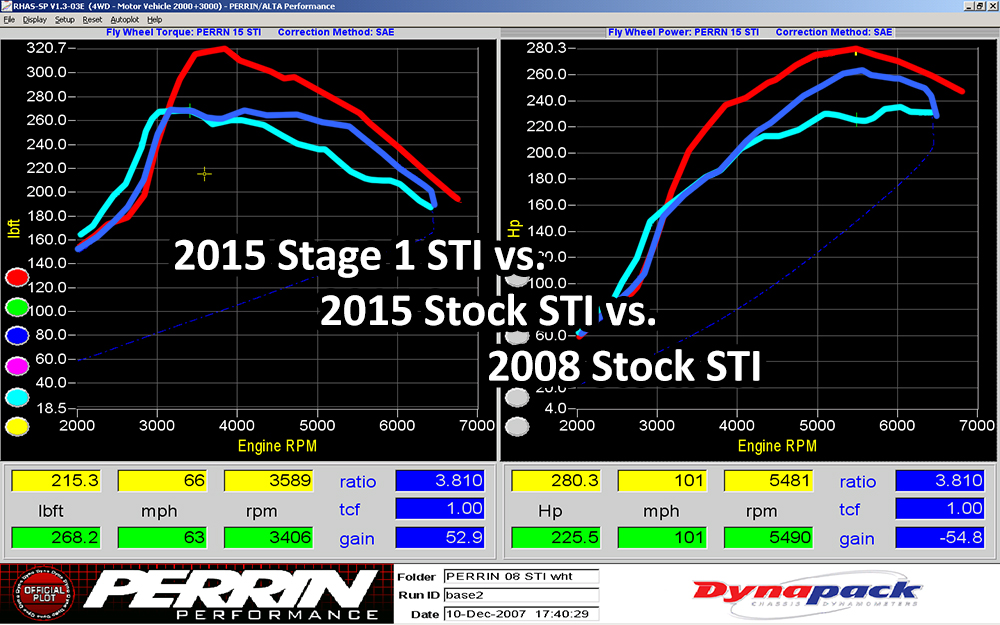 I am still really in love with this car and can't wait to start tossing on parts that will make even more HP. The first mod I have planned is one of our equal length headers. Yes, I am not a boxer sound fan, sorry fan boys. I love the smoother, more quiet equal sound our headers provide. Also, they increase turbo spool along with make more power, so that will be a fun first mod to show off.

After that, a catback exhaust, then our cold air intake system. This is a little unorthodox compared to how other people modify their cars, but it will be interesting to see how the header works on a stock car or with a tune. I think with all three of them installed we will easily break 300 WHP and maybe even 320WHP!

So, why does the turbo spool slower?? We are not ready to rip the turbo off the car as we have lots of testing to do, but I did measure the turbine housing in a place that I could easily replicate on a Vf48 from a 2008 STI. I really suspect that Subaru installed a larger AR housing on the 2015 STI. As you can see the boost comes on later, but makes more mid-range and top end power than it did before. This is exactly what we see when swapping to larger turbine housings on our rotated turbo kits.

What I discovered isn't something that I can say is proof the turbine housing is larger, but this was an accurate and consistent way to check. It's a pretty small difference, and it could be just a casting change, but the tooling used to make these housings are more accurate than this. I really think this is what changed about these car, but I can't be 100% sure until I rip off the turbo and measure things. On a side note, Subaru says the part number is the same from 2014 STI to the 2015 STI. 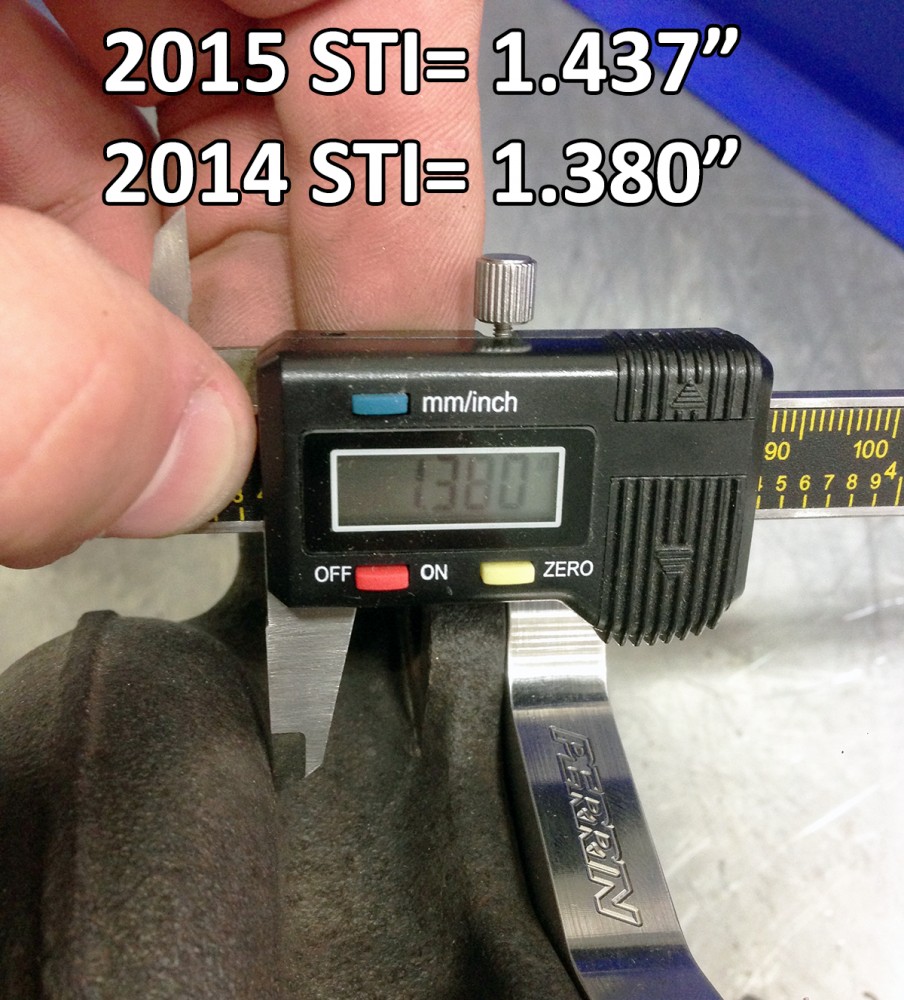