Described in this article are 3 very popular Subaru applications for the PERRIN PWI-1 water/methonal Injection system. We will be talking about the benefits of Water/Methonal injection, and proving how they work. The Features of the PERRIN PWI-1 system are best found in the features tab. Things in this article are specifically about Subaru€™s but the same types of results can be had with similar applications.

Firsts lets talk about the term Water Injection. This is somewhat a generic term referring to injecting a water/methanol mixture into the engine.  The mixture of water to methanol can vary to create different results.  Water is used for in cylinder cooling and Methanol is used for its high octane rating, and its ability to remove heat.  Water doesn€™t burn but sucks up lots of heat from the combustion chamber. Injecting this by itself will cause a loss in power if the ECU is not retuned for it.  Methanol does burn, and has a very high octane rating. The in cylinder cooling from water, and the high octane from Methanol create a mixture that will significantly reduce the onset of detonation. Water/Methanol injection is something tuners are looking for as this doesn€™t limit them to boost level had by low octane pump fuels.  For all of our tests we use a 50/50 mixture. This is a safe mixture, and provides the biggest benefit of cooling and detonation control. How can tuners use water/methanol injection to increase power? That is simple!  With the reduction of detonation/knock, a tuner can increase boost pressure, increase ignition timing, and lean out the fuel mixture.  All things that may not have been possible with standard octane pump fuel.

With all of these tests we are showing off the PERRIN PWI-1 meth/water injection system.  There are many features to this system, and probably the most important is the failsafes we have built into them. With the PWI-1, we use a flow sensors to map out the flow of water vs, injector duty cycle.  With these 2 bits of info we can see if a nozzle is block or a hose poped off.  The brain also has the ability to adjust the amount of flow it should be seeing based on different nozzle sizes.

Much of this info can be found on our site where you can buy the PWI-1 System.  The PWI-1 failsafe is hooked to a relay. This relay give yous the freedom to hook it up a bunch of different ways. You can use it to change maps in an ECU, cut power to a boost solenoid to lower boost, power a light to indicate low flow, or any number of things.  This is what makes our Water injection system stand out from the rest.  This, along with its progressive nature in delivering more water/meth with more fuel flow, creates a perfect water/methanol system!

This first example of how water injection can be used is shown on a very common setup.  A 2005 Subaru WRX 2.0L, with stock turbo, stock Top Mounted intercooler, and catted turboback exhaust. This is also known as a common Stage 2 WRX.  This car was first tuned on 92 octane pump fuel.  As PDXtuning pushed the limits of the pump fuel they settled on 17psi of boost, and a safe air fuel ratio of 11.0-1.  This netted 224WHP and 238ft-lbs of torque. Any more boost, or any leaner mixture and detonation started to happen. Initially turning on the water injection with the existing tune actually looses a little bit of power. This is to be expected as you are injecting water (which doesn€™t burn) and methanol, which further richens the air fuel mixture. Water injection allows a much leaner Air Fuel Ratio.  PDXtuning started to lean the mixture out to 11.5-11.7AFR. Great power gains, were see with this alone. Next is boost, with the limits of the turbo size, PDX increased boost about 1.4psi more to 18psi.  Along with this a couple degrees of timing were added across the board, and below are the results. 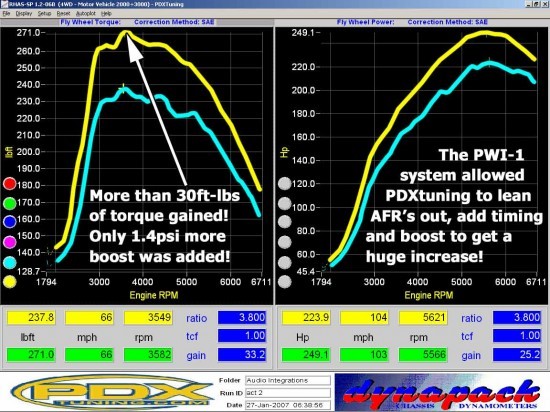 One thing to notice is how much smoother the runs with the water injection are. The Dynapack dyno is very sensitive to things like detonation, and timing changes, which in turn shows up in the graphs.  The smoothness shows detonation is far from happening.  The PWI-1 system on this car is a very potent tool that proved its worthiness for this customer and tuner.  The PWI-1 was a huge part of making this stage2 WRX arguably the highest WHP Stage 2 WRX out there!

This second example of how water injection can be used is on another very common setup.  A 2006 Subaru STI 2.5L, with stock turbo, stock Top Mounted intercooler, and catted turboback exhaust.  This is also known as a common Stage 2 STI.  This car was first tuned on 92 octane pump fuel.  The STI has one major thing that hinders its ultimate WHP output, the turbo!  Not matter what you do the most boost you can get at redline is about 14-15psi.  This limits the obtainable HP to be had at the upper RPM€™s.  But they can run lots more boots in the midrange.  With Stage 2 STI€™s, their big power and torque gains happen here, and this is where the PWI-1 will show its strengths.  PDXTuning settled on 17psi of peak boost, and a safe air fuel ratio of 11.5-1.  This netted 20WHP and 20ft-lbs of torque over the base supplied map. Any more boost, more timing, or any leaner mixture and detonation started to happen. 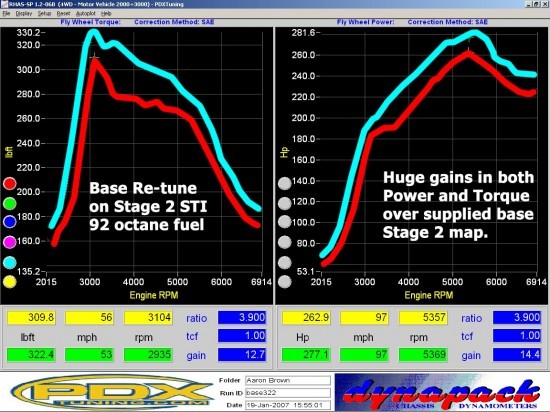 This graph shows a base map ran on the dyno, compared to a tuned map from PDXTuning. The run above shows the tuned map with nothing else but the WI being turned on.  Like in the above car, turning on the water injection with the existing tune gains no power.  A loss in HP, is pretty normal with any water injection setup and to gain power back you need to lean the AFR€™s back to where they were.  In this case PDXtuning started to lean the mixture out to 11.7-11.9AFR€™s and huge gains were seen.  This time boost would be left alone, and timing would be increased.  The 50/50 mixture allowed for some crazy timing increases.  The timing numbers ended up being about 3-5 degrees higher!  More timing equals more torque and power! 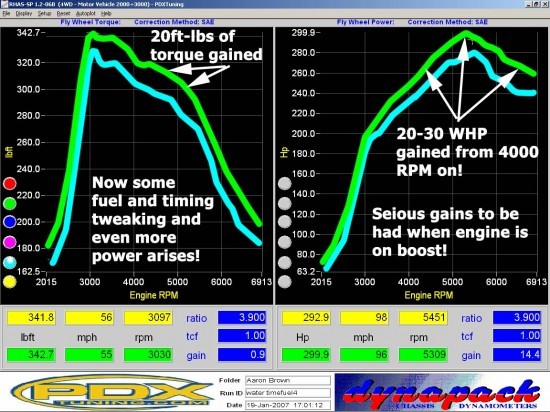 Shows great gains with same amount of boost. That is safe big power! Next up is boost.  With the water injection turned on, the engine loved more boost.  With in reason the boost was turned up as much as possible, which at peak power, and redline was not much different than the first runs. Again, this was due to the size of the turbo, and is why peak power at redline isn€™t uch different.  PDXtuning increased boost to about 20PSI at peak torque and as much as possible at redline.  With the added timing, boost, and leaner AFR€™s, the upper RPM increases were not huge, but check out the Torque!  Like the other car, this Stage 2 STI is the highest torque PDXTuning has ever seen!  That is V8 torque from a 4 cylinder! 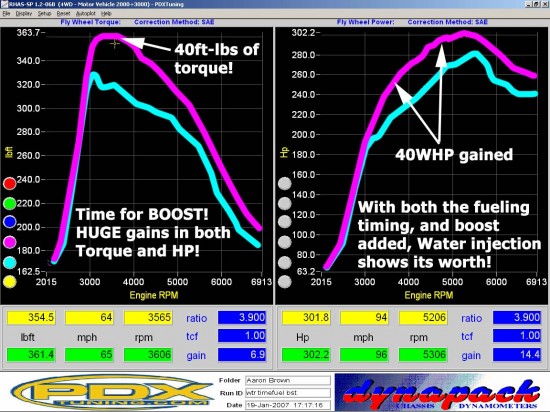 This case is brought to you buy HARMON MOTIVE.  Another great tuner in the Subaru World shows off their ability to tune, and use a PWI-1 system on a 20G powered 2006 ST0 on 91octane California fuel. On this 2006 STI, our customer wanted to make a lot of power on his daily driver while maintaining a very stock appearance. The Perrin WI kit was the perfect addition to this setup because it allowed us to make great power while retaining the stock top-mount intercooler. 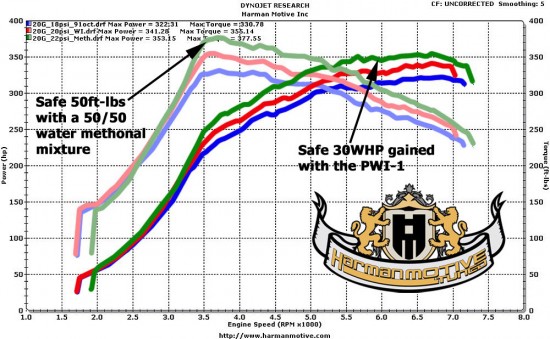 20G_18psi_91oct.drf  BLUE RUNS Running on straight California 91 octane pump gas, we tuned the car to a peak boost of 18psi falling to 17psi by redline. Air fuel ratio was kept at a conservative 10.8:1 to help reduce the chance of detonation with the low quality fuel we have. Once we achieved a consistent and stable tune, we moved to the water injection. 20G_20psi_WI.drf  RED RUNS Since we had reached the limits of safe power on 91 octane, we started to tune using 100% water. With the water injection turning on at around 7psi and using a .8 nozzle, we first leaned the car to 12:1 air fuel ratio. With the leaner mixture, power was already starting to increase. Now that we had the optimum air fuel ratio, we added 2 psi of boost and a couple of degrees of timing to achieve 20 additional HP and 25 lb/ft of torque. 20G_22psi_Meth.drf GREEN RUNS To get that last bit of horsepower and torque, we changed the mixture to 50% water and 50% methanol. The methanol has a dramatic effect on octane levels and allows us to run more boost and timing over water alone. We were able to add another 2 psi of boost (now 4psi total over pump gas) which allowed us to make an amazing 377 lb/ft of torque to the wheels. Horsepower was also increased to 353whp.  We were now making 30whp and 47lb/ft over pump gas! Best of all, with the 3 gallon tank we used, the water and methanol need to be refilled only once every couple of weeks! Thanks to Dan, Paul, and Ian for the awesome write up and install of the PERRIN PWI-1. From these 3 tests you can see how water injection is a great way to make safe power. Especially for customers with 91 octane, which is normally very limiting, this is like running race fuel in your car all the time!  Look for most Water injection tests to follow on Diesel trucks and some SC V8's!