For this session we had 4 good things to test.

4. Intake system before and after with exhaust system installed

All of these tests were done with our new in house Dynapack AWD dyno.  While the overall numbers may vary from previous ALTA runs published on the Internet, the difference before and after is what is most important when making comparisons.  This is important to note as our base WHP and TQ were lower than previously found by about 8WHP and 10ft-lbs of torque. This is somewhat expected, (we want to make this clear) sine the date, time, location and humidity are all different. This should in NO way be considered a means to doubt previous results.  Like all other ALTA dyno testing, many runs were done to back up gains, and to show consistency.  The runs published are the runs we choose that represented the best-averaged gain. NOTE: Dyno testing is great for keeping things consistent, and is recognized in the industry as the best way to compare HP and TRQ gains.  The constant airflow and load values help produce both accurate and repeatable results.  While testing on a public road could be done, this testing method is neither safe nor legal.  Wheel Horsepower numbers we see on the dyno should be lower than what you would find on the road. So expect those who use G-tech type HP monitor systems to see a bit more that what we see. Again, comparison is the key! One variable that is difficult to control on the R56 is boost.  Like previous runs we had done on the R56, the boost was not very consistent.  Sometimes runs would make more boost down low, but cut it down up top. Others would make less boost down low and keep it higher up top.  We have hypothesized that MINI programmed the ECU to deliver a certain €œVolume€ of boost over a given period of time. Say we do a run that when the dyno is launching it makes 6psi, then jumps 12psi at 3000RPM, then at redline it makes 10psi.  If we install a part that frees up some boost, the launch boost might go to 8psi, then jump to 14psi, but at a certain point, the boost drops to 8-9psi at redline.  This happens in varying amounts depending on the actual boost levels. While this all sounds confusing, the good thing is, the way the Dynapack sets up each run, makes it consistent between runs.  The dyno graph below shows one of the most extreme examples of this phenomenon. 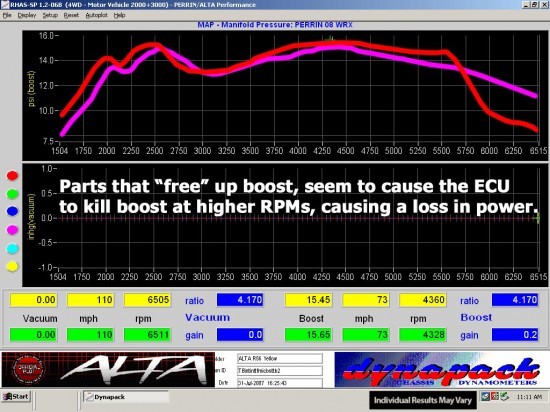 During our first test we published online we never showed the difference the intake made with our 3€ Turbo-back exhaust installed. This setup is becoming more and more popular, and more and more people were asking about this graph.  So we did it while retesting some other parts. When first testing our intake system on bone stock car, we found much more gains across the board. When testing it with our 3€ Turbo-back installed, we were seeing the bulk of the gain at higher RPM, but still close to 10WHP. Below is the graph showing our averaged gains. 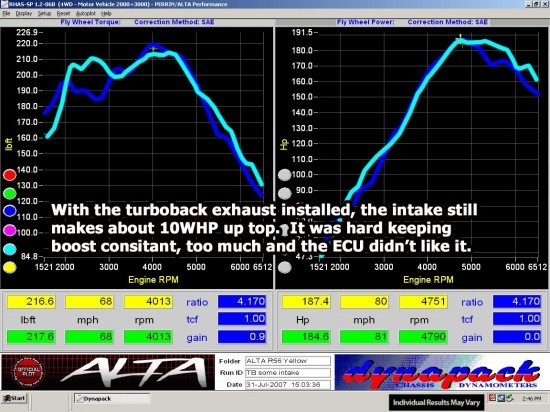 You can see there is a large gain at lower RPM, but some of this was due to the car running 2psi more boost there. The boost from there on up was the same as the previous run.  This shows that the OEM intake is still a restriction at the upper RPM€™s.  While the graph shows a gain at low RPM, since the car ran a couple PSI more there, we didn€™t think it was fair to use it as a selling feature. Either way, over all the turboback and intake together will net about 30Ft-lbs and 30WHP over stock.

While we initially developed this product as a dress up part to compliment the rest of the ALTA items, we were pleasantly surprised when the dyno results revealed good news. The illustration below shows how this product removes intake restriction. The hose on the left is the OEM unit sliced in half, and the ALTA replacement inlet hose on the right. Note the dramatic differences in ID's from one to the other. This allows a larger volume of air to be ingested with less restriction.

As you see, it actually gained HP!  This is a run with our intake, FMIC, and turboback already installed.  We were again pleased that the gains were very repeatable and that from run to run there was the same 7-8WHP from about 5400 RPM on up.   This is a great looking part,  and has been shown it performs just as well if not better than it looks. Combined with the ease of installation (less then 5 minutes) it will become part of our formula to make your MINI  that much faster! 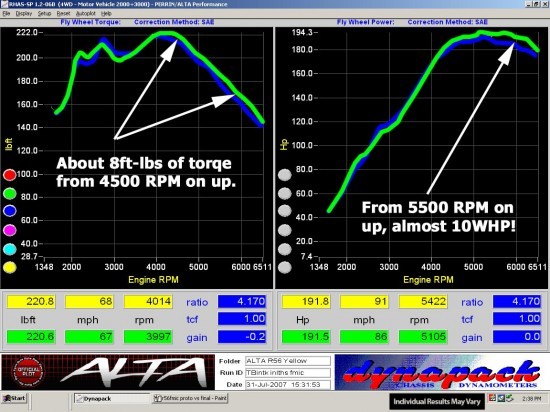 Like the gains shown above, this item also proved its merit as well as its good looks! While we were just about to pull the car of the dyno, we noticed we had enough time to throw this on and see what happens. Again, this part was initially designed as dress up part with a performance flair; we should have seen this as a performance part with a dressy look! We also removed a rather curious device that resembles a muffler of sorts, but MINI placed this on the intake side. While we knew our hoses were bigger than the OEM hoses, and much smoother all the way down to the intercooler, we never said it made HP.   Check out the side by side comparisons below and you can see now why the gains were seen. 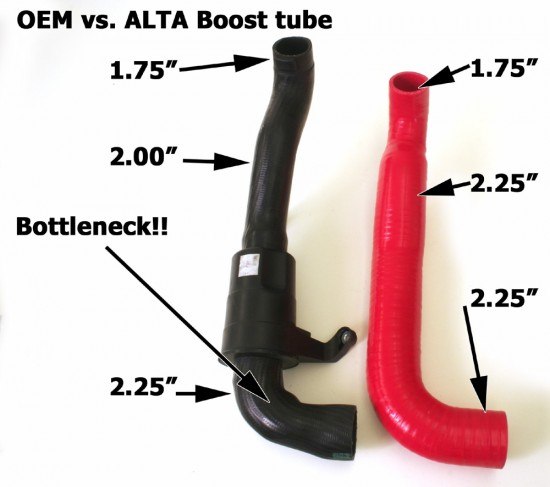 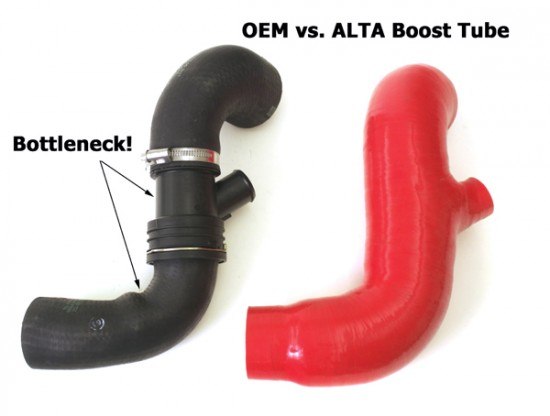 This test shown below was done with the intake, turbo back, FMIC, turbo inlet hose and boost tubes installed.  While the aforementioned items might contribute to the boost tube making the gains we saw, it is proof positive that the boost tube makes power. 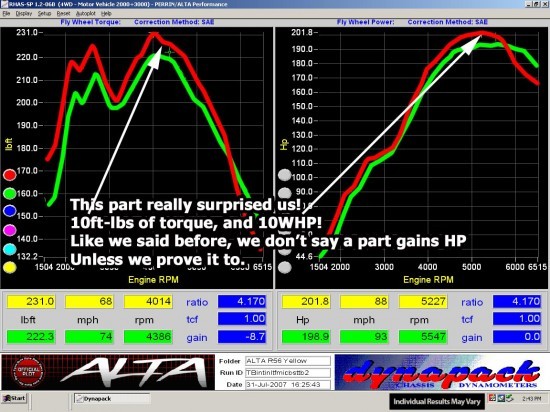 The most important thing we noticed was the increase in boost.  When the dyno was launching the car, the starting boost was about 1.5psi higher, which this carried across the entire RPM band.  Except above 5700.  This is where the ECU didn€™t like seeing this extra boost.  We don€™t think it was boost cut as the engine didn€™t stop it just lowered the boost.  With the smoother, and larger internals of our ALTA hose, it makes sense it makes more power.  Now keep in mind this is an entire replacement hose, not just a sleeve to get rid of the silencer.  I think a major reason why these make power is because they get rid of the tight restrictive bends, and the larger inside diameter.

Our Prototype core showed huge improvements over the stock core, by dropping the intercooler outlet temps as much as 40 degrees F. The Prototype core we measured roughly 3.0 PSI of pressure drop across the core, where the stock one was around 2.0 PSI.  Normally this would cause a loss in HP, but the above proves that the air temp being cooler is a big part of why it gains power. With some tweaking of the final design of the core and endtanks the retail units of the ALTA R56 core further improves upon both cooling and reduces pressure drop.  The intercooler outlet temps improved nearly 10 cooler degrees F, compared to our prototype.  (totaling more than 50 deg!) Cooler air means more power!  The pressure drop of our prototype was a little high, so we looked to improve this the most.  Again with some tweaking we got the pressure from about 2.8psi to a much more normal 1.0psi.  So we improved both pressure drop and the cooling of the intercooler with our final version. This info was something we have had for a while, now we have the dyno graphs to back up the new design as not only being more effective, but also backing up those claims with solid HP gains. 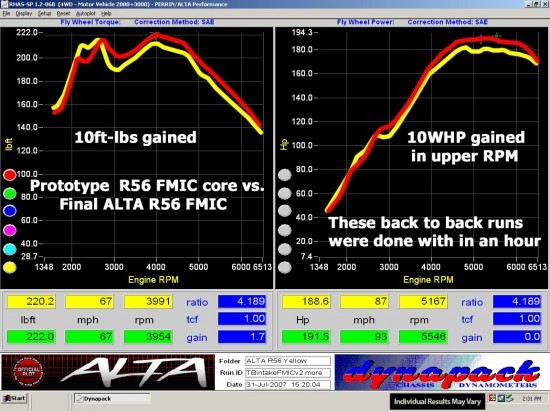 This test is with the prototype intercooler and final design ran back to back, and with-in minutes of each other.  Just like we expected to see, more WHP at the upper RPMs.  Not only is the overall WHP it gains very noticeable, but the ALTA FMIC looks really awesome on the car!

While many conclusions can be drawn from these results, they certainly show that airflow and charge air temps are crucial to making the maximum amounts of HP regardless of the boost level. When more boost can be added, as well as maintained across the RPM band, even MORE power can be had, and these airflow mods will only make those results more significant. We have been working for a lengthy period of time on an ECU product to compliment these other ALTA Products, and we will be able to tell everyone about it before November 1st 2007. Stay tuned. You can use these results to help determine the best path for you. Most clients are drawn to the visual, and aural benefits of an exhaust and intake. But these results show you can get similar gains with the intercooler, inlet hose and boost tubes. The latter is a far stealthier setup. So ultimately the choices are yours! The best gains are with all items combined, and then with the upcoming ECU added to it! Stay tuned for the next round of dyno testing from ALTA! Questions? Feel free to e-mail or call us at anytime. We always welcome a conversation with a fellow enthusiast! 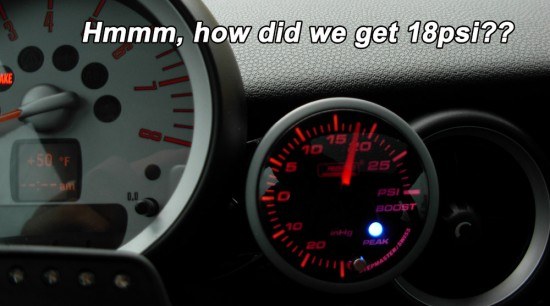