We are starting out with the Gt2560R turbo because we feel this is the best-matched turbo for the Mini. This turbo should be pretty responsive, and still be able to make about 300HP at the engine.  We expect this turbo to spool about 1000 RPM later than the stock turbo, but make about 50 extra WHP up top.  But this is all just a guess until we start tuning the car. The other turbos that fit this kit will be a good option for those who are looking to get a few extra HP beyond this. But the reason why we didn€™t start with this is because of lag. We think these other turbos are not going to build boost until way after 3000 RPM.  While this may not sound that bad, when you compare that your R56 builds boost at 1500 RPM, this not the best option. 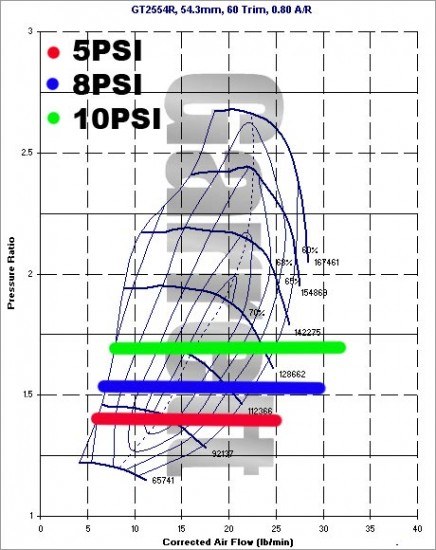 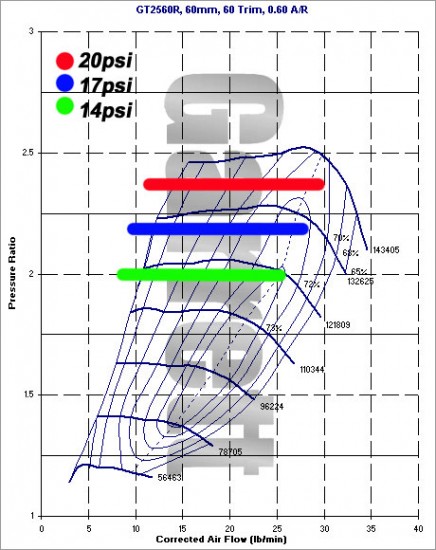 The above charts are Compressor maps for the GT2554R and GT2560R turbos. The plotted lines represent engine airflow at different pressure levels starting with 2000 RPM and stopping at 6500 RPM. Before we even started to build the turbo kits, you can see that these are the best choices that fit the 1.6L.  While the charts start at 2000 RPM, neither of these turbos will build 14psi at 2000 RPM.  So keep that in mind.  The GT2554R map fits the 1.6L best given the engines 6500 RPM redline and the reasonable boost levels we would be running. But as it gets to 6500, the efficiency really drops off.  The larger GT2560R would give us the best power, because of how much more efficient it is toward redline.  That extra 5-10% points in effiecency is free HP!  Also this turbo will not have the surge issues the smaller one will have running 20psi at low RPM.  The only down fall is a little bit more lag.  But given the same turbine wheel and AR, it will be pretty minor.   Plus the GT2560R would be the best choice when it comes time to raise the redline! For those who hadn€™t seen the R56 turbo kit we have brought to a few shows, here are some other pics for you. 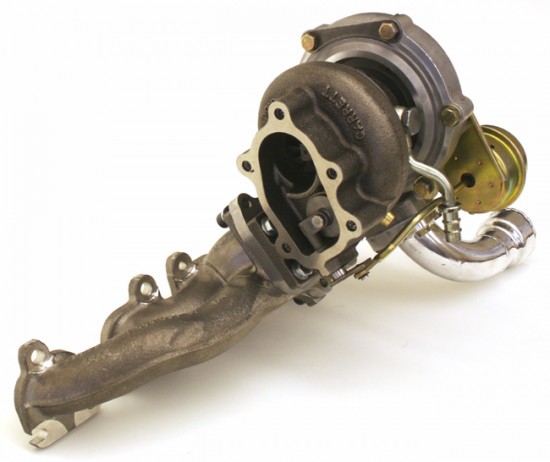 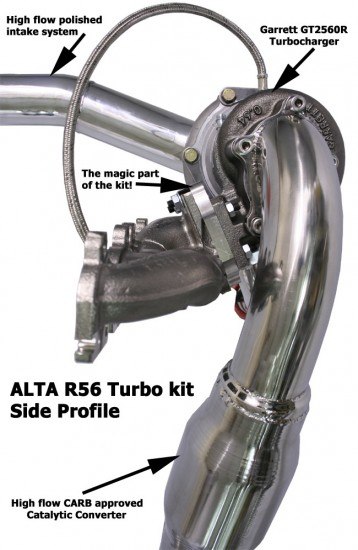 These are the pics we showed a few months back before our trip to the Dragon.  Until now, this kit was just pics waiting for some Engine Management.  Hmmm, where can we get that???  Unichip!! Here is the turbo kit installed on the car. Besides the huge turbo, its not too much different than the stock setup, as things are laid out very similar. 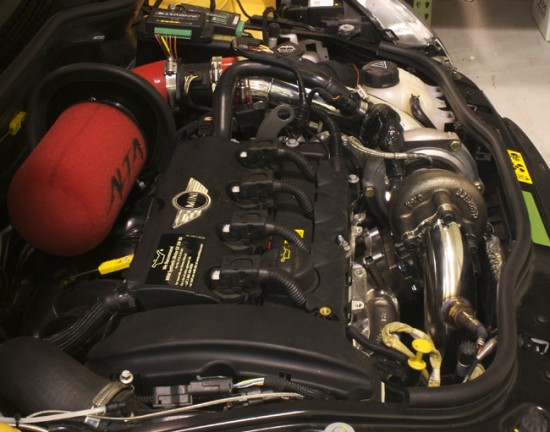 Engine bay shot.  Everything looks like its supposed to be there!  The only thing missing from the pictures is the heatshield. Nice shot of the Garrett GT2560R turbine wheel and wastegate. I think Mini needs to build a bulge in the hood for our turbo! 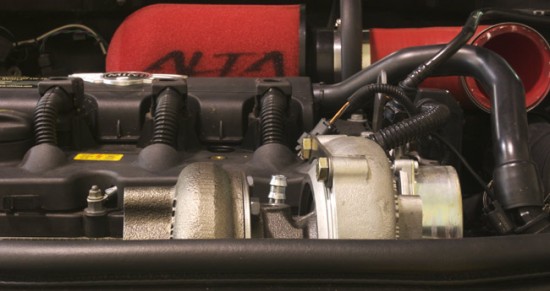 So what comes in the kit?  Lots of things but rather simple things.  The big part of the kit is a Garrett Ball Bearing Gt2560R turbo. This is an off the shelf Garrett turbo, we do not modify it in anyway to work on the Mini.  This is important, as if anything ever happened (out of warranty) you can get the parts from tons of different places.  Also this is important, as there are some other turbo options for going bigger (or smaller) down the road.  The rest of the parts include the Turbo Adapter flange, oil line, coolant lines, oil drain hoses and flange, ALTA Pyroshield hose cover, Turbo inlet hose with adapter for intake system, Turbo outlet adapter, boost tube coupler, Turbo heat shield, ALTA Manual Boost controller, ALTA recirc BOV, ALTA UNIchip and last but not least is a catted shorty downpipe.  So what do you need to complete the kit from there? You need to have at Alta Turbo back Exhaust, ALTA intake and ALTA Front Mounted intercooler, along with a boost gauge.  This is how our car is setup currently with the turbo kit to show everyone what they can expect from their mini.

We tried to run the least amount of boost possible to get a good starting point€¦€¦but that€™s no fun! A couple things to clear up first.  We used our last published runs did on the stock turbo to compare the turbo kit against.  At the time we published those numbers, they were the highest numbers we had ever gotten, and the highest anyone else had ever gotten.  These runs showed 265ft-lbs and 220 WHP.  These runs are with our Turboback Exhaust, Front Mounted Intercooler, Cold Air Intake, Turbo inlet hose, and boost tube kit. This is the boost we started out with.  The blue line represents the boost we run on the Stage 3 Unichip tune. The 21psi-14psi boost curve happens because of the turbo starting to run out of air, and the efficiency of the turbo dropping off.  From the first few runs we could tell that the turbo wasn€™t going to build full boost until just after 3000 RPM. Not bad compared to other turbo cars out there.  Or for a turbo kit. 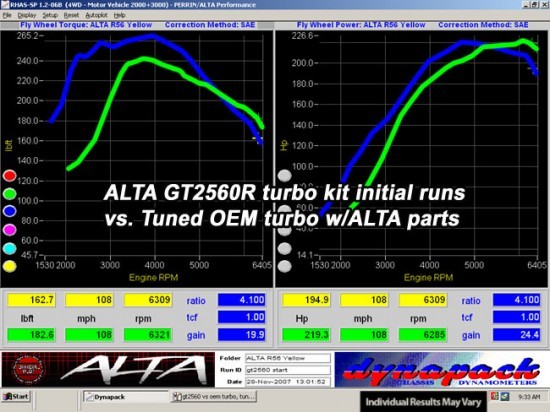 The HP results were better than we expect. Looking at peak numbers, we were still hitting 220 WHP, but at a later RPM. The turbo builds full boost about 1000 RPM later, which driving on the road is hardly noticeable. With some initial runs showing a loss in peak torque, it looks like it time to work our magic. Before we go nuts with trying to blow up the engine with 25psi, we needed to test the waters a bit.  So after we got the ECU dialed in at 16psi, it was time to turn it up a bit to 18psi.  The one thing we really discovered is how smart the ECU is. The entire time we have been playing with this car, we haven€™t heard a single bit of knock.  But we see evidence that the ECU pulls timing, and adds fuel when it gets a bit noisy. I think that it€™s a bit sensitive, but that is a good thing.  After a couple of hours of tweaking and learning, we came to what you see below! 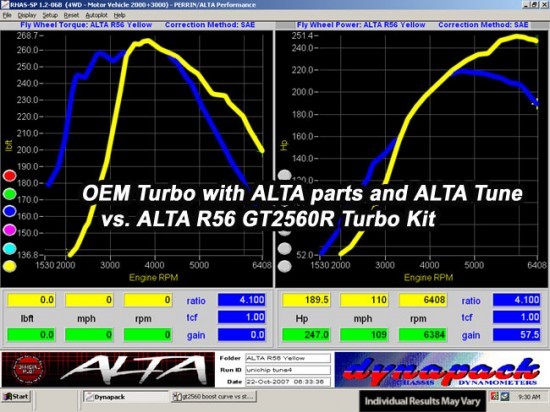 If you look at peak torque numbers, we actually beat our previous numbers with the Unichip, stock turbo and all the other bolt-on parts.  Its not a lot but we beat it.  But from 3500RPM on up, the ALTA turbo kit wins everywhere!  Instead of a bunch of low-end power and a huge loss above 4500, you now have a steadily increasing power curve all the way to redline!  60WHP and 45ft-lbs of torque at 6400!!  The graph shows exactly what the car feels like, nice smooth linear power across the RPM band. This is a safe tune with safe numbers, and safe boost levels, safe AFR€™s, and best of all your traction control still works, cause you will need it!

Comparisons of ALTA Turbo Kit to Other Cars

So what does all that mean?  Well here are some other dynos of cars to give you an idea what to expect. This was our runs on our R56 with all of our bolt ons, but NO Unichip tune.  So stock boost levels (kind of), and a rather tame 200WHP.  If you compare our turbo kit to this setup (which is still beyond what most people have), it wins everywhere beyond 3000rpm.  This might look bad on a graph, but who drives below 3000 RPM! This is my favorite one.  Not that the SC R53 is not a fun and fast car, but check this out!  60-70WHP gain from 4000rpm on up, and nearly 100ft-lbs of torque that might be noticeable!  The only thing that the R56 needs is a little RPM! Then it will really compare. Ok, this one isn€™t a Mini, but it is a car that people mod and a car you see a lot of. This is a 2002 WRX with a catback exhaust and a custom tune.  So which car would be faster in the 1/4mile??  Tuff to say, but its an interesting comparison.

Yes, the turbo works, and makes power!  Yes, it looses some low end power in trade for some top end power.  At least with the way I drive, as long as I am at 2500RPM or later, the car is just as snappy as the OEM, and way snappier after 4000RPM. I think the one think I really like is the car is way more drivable. Meaning that instant switch type power is gone.  While the instant switch type power sounds good, its not the smoothest power delivery. When feathering the throttle.  With the added lag of turbo at lower RPM it feels like I could drive my wife to dinner, and she would have no idea that something was done to the car (which is a good feature for some). But then when I put my foot into above 3000, the car really comes to life.  Track guys will like this setup much more, as there is more predictable power, and better application of the power.  All this power is still with (2) 49 state legal cats, which means the tail pipe emissions are going good, and still nice and quiet!

Well, that is easy Water injection, and more boost!  The water injection tests are done but we are going to give you all a little while to digest the info presented above.  We feel that 18psi is perfect for the street and perfect for our base kit.  Can we go more?  Sure with water injection, we can surely turn the boost up a bit to 20psi to make some glory runs, but this is not where we will leave it for customers. In the next few days you might see 300WHP, but only with the water/meth injection turned on.