By Perrin Performance Oct 20, 2007
Category : Project Builds Back to Blog 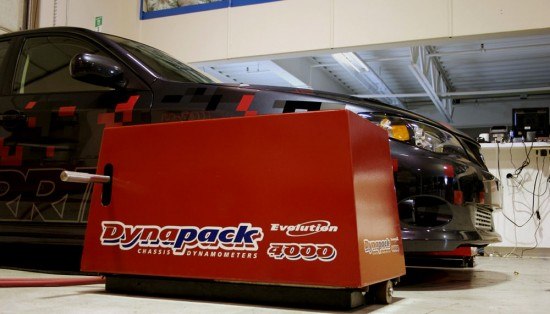 Besides building a fast and cool looking 2008 WRX, we had a goal to showcase a turbo that I think should be the most popular for the normal guy thinking of a turbo kit for his 2.5L Turbo motor. The GT3071R!  This turbo gets overlooked quite often.  It easily makes 350WHP on an STI, and on race fuel/Water injection 400WHP can also be had easily.  The GT3076R (the more popular turbo) is also good for these numbers, but can easily support an extra 50WHP beyond those numbers. So why not just go with the bigger turbo, it makes more power???  Response!  The GT3076R turbo (given similar dyno loads and same turbine AR€™s) spool about 700RPM later than the GT3071R. For an Autocross guy that wants a nice responsive turbo, and doesn€™t care about making over 400WHP the GT3071R turbo is for them.

To add to all that, this test was done with a catalytic converter. While the stock car has two of them, and to keep it 100% legal it needs two, one cat is good enough to pass the tail pipe test and to keep the ECU happy.  But still not legal, just need to make that clear.  Also with the fuel pump issue we had, we would be putting the OEM fuel pump to the test.

The results below are for a GT3071R with a .82AR housing. The smaller .63AR housing will be tested at a later date to show the difference in HP and responsiveness.

We had just made a trip to LasVegas to attend the Street Tuner Shootout event at Spring Mountain. This was the debut of the car, and we had basically no time to tune the car, except driving it around the track.  Sounds scary but with the Hydra ECU on Autotune, the AFRs were stable and safe. With 4 good sessions of tuning at 16psi, the car was running great.  But how much power were we running?  After the car was setup on the dyno, the first runs were showing at 16.7PSI, we were hitting 320WHP and  340ft-lbs.  People were asking us at the track how much we thought we were making, and guess of 320 was right on! Before we get too far, its important to mention that Hydra came through with a custom ECU for us for this event.  Hydra put together 2 special harnesses, one that uses the stock ECU to drive the dash and one that did completely away with the stock ECU.  The later didn€™t work as the ECU has an immobilizer built into it, and it wouldn€™t let the car start.   So the pass through version was used, and installed in the car.  The Hydra on this setup fits in the glove box which is a nice clean and tidy place for it. While I have tune a bunch of cars with the Hydra, I had Tim Bailey of Surgeline tuning to come by and help out.  Tim has been tuning cars across the country by himself for about 6 months, and turned it into a full time job. He is also supplying us with our custom tuned maps for our AccessPORT program.  Yes if you haven€™t seen that PERRIN is selling a COBB part, we are!  The AP is the best ECU flash tool, so why not sell it!  Anyway as seen above, the Dyno we bought is a Dynapack, which is a great tool for our R&D stuff.  Its great for repeatability and for providing HP numbers that don't read too high or too low.

The difference between these two runs was a couple three degrees of timing from 5500RPM on up.   40WHP with a few degrees is somewhat expect with the detuned nature it was in.  With further fueling/timing changes and adding boost along the way we easily got to our 350WHP goal. Ya, like we were going to stop there! The fueling seemed to make the biggest difference in power, not timing.  Timing wasn€™t really messed with a whole lot until we turned the boost up to 20psi. Like I somewhat expected with this smaller turbo, we would get to a point where timing would really having be retarded and fueling would get richer. The sweet spot was right at the 19psi range, where we saw the most consistent and least noisey (knock) runs.  We turned up the boost to get some good numbers, and while these were reliable runs, the boost was turned back down to 19psi, and left alone. 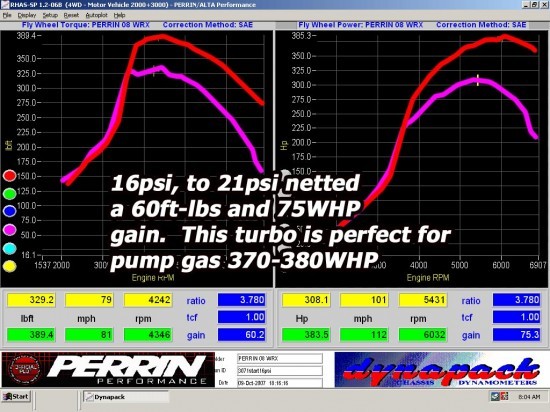 The final results are pretty good in my opinion. We did start to run out of fuel with the pump. Anything above 20psi and about 6500 RPM were having to add a lot more fuel.  The Hydra€™s Fuel map had a €œFuel Nipple€ as Tim called it at these upper RPMS and boost ranges.  Now that we have more time, a Walbro will surely be dropped in there and retuned on the dyno.  Most likely this will wait for the water injection install and tune. 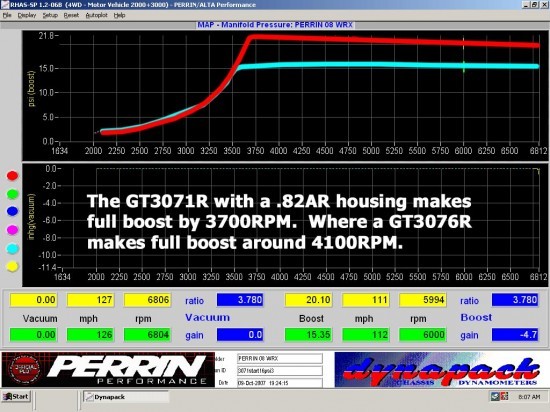 The boost curve of the GT3071R with .82AR is very good and responsive. The above graph shows the boost curve using the WG spring (16psi) and a PERRIN MBC for the increased boost.  18psi showed a near perfectly flat boost curve (I guess curve isn€™t the right term, boost flat??) As we increase the boost, the €œcurve€ became more of a slope showing the turbo€™s efficiency starting to drop and looking at a compressor map it makes sense.  Garrett says the turbo is good to 475 Crank HP which we were getting close to at the 380WHP mark. Sure enough, from about 6200RPM on up and 21psi, power started to drop and it was harder to keep the engine quieter.  Interesting, torque peak occurred right where is should according to the graph, right in most efficient part of the map. 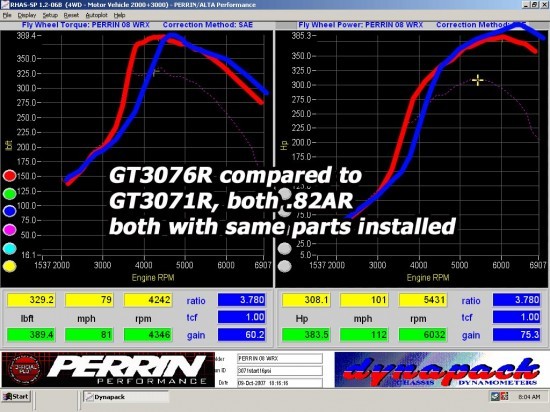 Here is the GT3076R .82 graph over laid from our shop Limited STI, and the GT3071R w/.82.  As you would expect from a slightly smaller turbo, more responsive, quicker spool, torque peak is earlier, but top end power not there.  As cool as it is, to have a big huge turbo on your car, I thinks it cooler to have a more drivable car!  This car feels great on the street.  Just the right amount of power, and the 5spd (with longer gearing) really likes this turbo.

Here is the list of parts installed on the car. 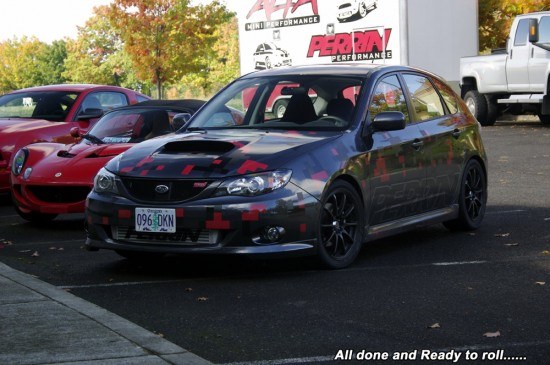