By Perrin Performance Aug 19, 2008
Category : MINI Only Back to Blog

It was inevitable that we would get one of the newest coolest Mini coopers out there.  Some might think we just do this for fun, but don't forget our fun is also our business.  Getting the newest coolest cars is important for us to develop new parts and prove our existing parts on.  Our business does have its benefits! The car we got is actually a special launch JCW R56. This means that there are few special items already installed on the car.  The launch package consists of a few things like special badging, illuminated shifter and some other minor things.  This launch package consists of certain options like the body kit, wheels, and some of the other trim pieces like a sunroof.  The sunroof is nice and all, but it adds lots of weight and cuts down on the headroom for a helmet!  This may not be a problem for most people, but the first time you go to an event that requires a helmet and you don't fit in the car with it, you will see what I mean!

We actually ordered a Pepper White JCW car a few months back and it was planned to be delivered this October.  When our local dealer called and said they had a special launch JCW Mini, it only made sense that we bought it to get ahead of the competition on this car. So what is different about this new car?  To the normal onlooker the new mini looks just like the others out there.  But we are not normal onlookers.  From the outside the new JCW factory equipped car has a few minor badge changes like the JCW badge and the winglets on the front fenders.  Gone is chrome around the normal R56 badge.  I am not a huge fan of chrome and I was glad to see the chrome on the front upper grill gone!   The side trim still have the chrome but its still better than it was.

The JCW model has much more aggressive wheels than the stock R56 wheels.  I think these are almost perfect (just need to be wider and black) and personally I think that this will not be one of the first things a customer will chang when they get their Mini.  I am sure we will just because we can€™t leave the car stock.  Our shop car has the JCW body kit, which is an item you can order on the normal R56 as an option.  The body kit has some really cool side vents and much more aggressive front and rear bumper.

Speaking of options, normally you could get the JCW upgraded brakes, but the JCW brakes that come on this car are not just red calipers and special rotors.  These are nice big Brembo calipers with huge 12.44" rotors.  Yes the car is small and may not NEED bigger brakes, but who really NEEDS more power either!  For street driving they may be overkill but for those who hit the track once and a while these brakes will have significantly less fade.  These are very different looking calipers compared to others seen on STI's, EVO's and 350'z. They seem be a little bulkier, but still a significant upgrade from the stock Iron calipers.  At a closer inspection, you can see some interesting clips holding the pads into them.  Poking a bit further find that these clips simply flip open and allow the user to swap pads with out the need to pull clips or pins.  This will be a very handy thing to have at the track!

The last and final thing that makes the JCW "Look" different is the tips on the exhaust. They are much nicer, much more racier looking. They are a single wall tip that sticks out just a little more than the normal tips and says, hay look at me, I am not stock!  Initially the exhaust looks just like the other, but there is one really important thing missing, a Cat!  The older R56€™s had 2 cats in the exhaust. One right after the turbo and one a little further down stream.  The last one was not monitored but the ECU, but more of a scrubber.  Many newer turbo cars have these dual cat setups.  For us to be as legal as possible, this meant we needed to build an exhaust with two in it. Well now we can build an exhaust with one cat legally and maybe get a little more power from this new car! This will come at the expense of sound, but we can fix that!  That is about it for the outside of the car.  Now its time for the more important change of the new JCW.

The engine is now rated at more than 200HP. Mini has taken its super sweet, super high tech Direct Injected powerplant and unleashed more HP.  On any turbo car the one thing that makes the biggest difference is boost from the turbo and also the size of turbo itself. Yes, mini changed the compression ratio a bit, and cams, and some other things, but these are very very minor ways to change the power. 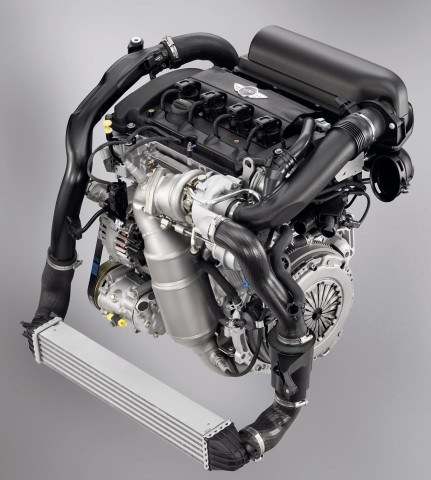 On any engine, airflow equals HP.  On a turbo car, this same rule applies.  Mini could have just pushed the stock 3K turbo to 200 engine HP, but the downfall is as you push the turbo further and further, it becomes less and less efficient.  While we have made way more than 200 Wheel HP on the normal R56 Mini, at 220 Wheel HP, we were definitely pushing the efficiency of the turbo.  So we are "blessed" that Mini used a bigger turbo to get this power.  This allows us to push the Mini even further than before! 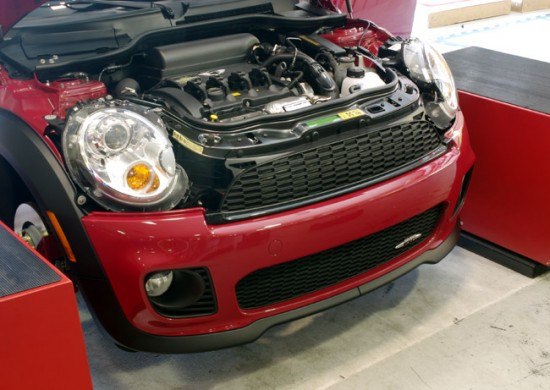 With this new bigger turbo, I would have hoped Mini would have upped the Intecooler size.  Well they didn€™t, it€™s the same short intercooler that€™s partially exposed to ambient air. This thing needs an intercooler!  We will for sure be doing another back to back run on this car with our intercooler. 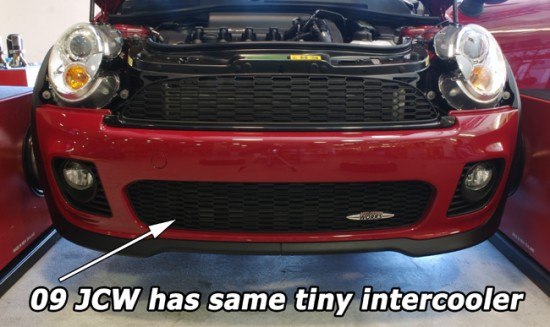 Ok, so Mini "claims" 208HP and 198 ft-lbs of torque.  We saw consistently 200-202 Wheel HP and a peak of 210 ft-lbs of torque. This is pretty amazing since the normal drivetrain loss on a FWD car is around 15%. The car should have put down closer to 176 HP at the wheels!  So already its no wonder why this car is a faster than other cars in its HP class, its slightly underrated!   Like with most turbo cars, it comes down to boost. The old cars boost curve was a wavy curve that started at 10psi, went up to 11psi, dropped to 8psi then back to 12psi, then finally 8psi at redline. This up and down curve also makes for an equally strange torque curve. 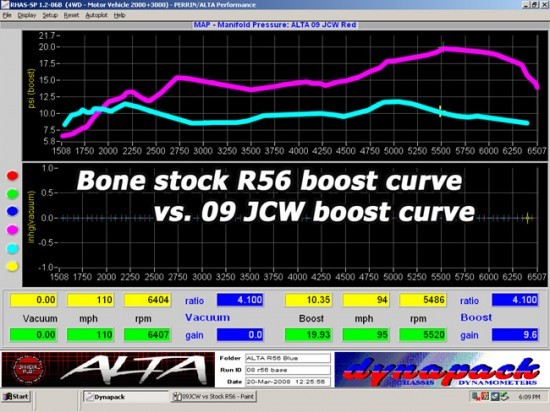 The new 09 JCW with the bigger turbo also has a similar strange curve. Because the slightly larger turbo is a little laggy, the boost starts lower, but it hits 12psi at a very low RPM of 2100, then climbs to 15psi, then down to 13psi, then slowly climbs up to 20psi at around 5700RPM. So Its pretty obvious why this new car makes more power than the old car. More boost! A bigger turbo does have its trade offs. Bigger means slower to spool and in turn means its slower to make power.  This responsiveness is called turbo lag.  But Mini did a great job at sizing the turbo just right. Yes the normal R56 turbo is quicker to spool, but it is almost too quick to spool. Its almost too twitchy at times when an exhaust is installed. This new turbo is perfect! With an exhaust installed, this turbo will be very smooth and be very powerful! 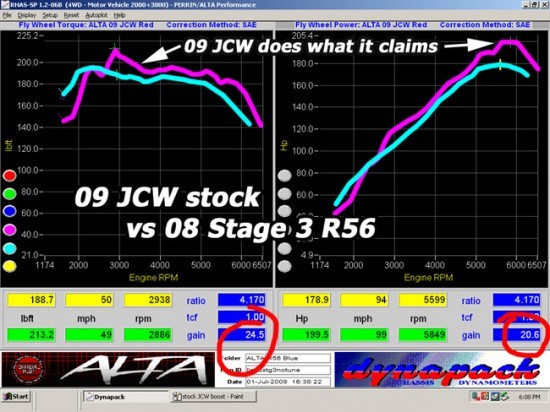 Ok so the engine is better and makes more power. But what else is different under the hood?  The one thing that sticks out is the new turbo inlet hose.  Its now plastic and looks to be a little better overall.  The placement of the crank case vent is in such a place that our current inlet hose will not just work. But no problem, we will be making a new one of those. Other than that, there is nothing else visual that has changed...........  Yes even the intake is the same.  We thought we would have gotten the JCW intake (with the paper cone filter) and to our surprise, NOPE!  Why is the question??  I am also lost and maybe this is a special launch package item??  Maybe the builder forgot to install it?  Who knows, but I have heard of 3 others with the same thing. 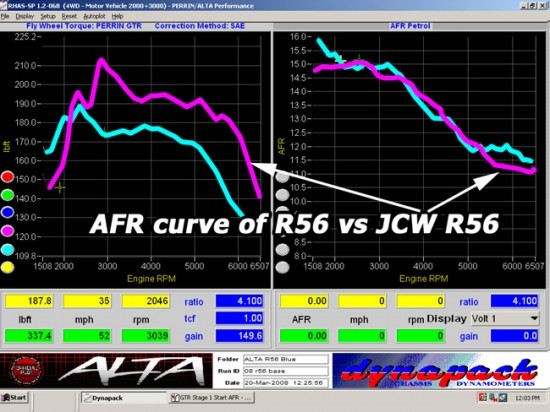 And here is the AFR curve. Its a little richer as it goes to redline, but not much. We discovered this while it was still bolted to the dyno, so of course we were going to test our panel filter at the same time (although should have been our JCW filter).  As we have seen before, the gains are not super huge on a stock car. But the benifit of not having to buy a filter every year and the slight increase in HP makes it a great option the first time you have to replace it. 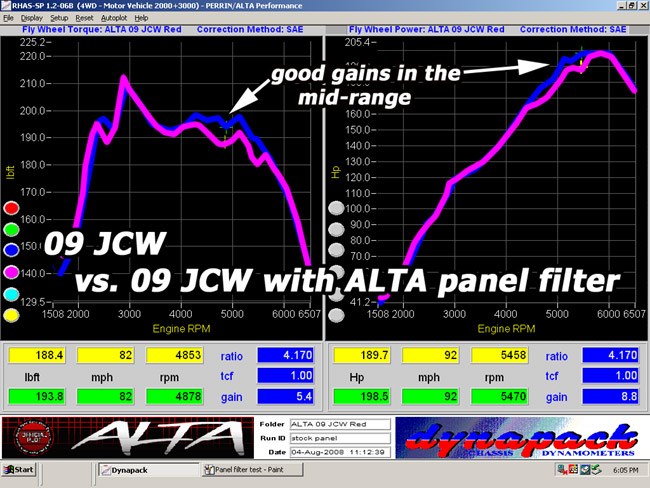 The JCW launch package car does have the JCW strut brace. It's not quite as nice as the M7 strut brace with the built in SRP's but it does the job!  While we were checking out the strut bar we pulled it off to weigh it and noticed that there were slots in the strut tops!

Finally Mini made a way to adjust camber on these cars.  We hadn't seen this before, so we stared pulling strut top nuts off of cars, and our older R56 and sometime in 08 Mini starting slotting the tops.  Both cars we had seen had the bolts pushed to the middle of the meaning that if you did lower the car there would be just enough to remove the unwanted camber. Its almost as if Mini took notice of people modifying their car. 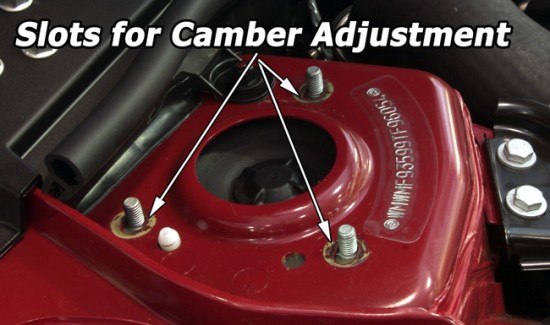 Ok that's about all we can say with the car just sitting here being critiqued and taken apart, next up is the test drive.  So with all those new things there were a couple things that stand out after 5minutes of driving. The steering is always stiff as though you have the sport button pushed.  The next thing that I noticed is the brakes. WOW are these touchy!  The larger brakes teamed with better pads definitely works! Doing some hard stops from the speed limit (of course nothing higher) showed almost zero fade and felt great.  After a few minutes I got used to the touchy pads and really started to like it. Ok and the MOST important part is power! This thing does feel like it has 200WHP!  The normal R56 feels great at low RPM but suffers up top. The JCW, just like the dyno shows, stomps the normal R56 from about 2700RPM on up.  The very small portion of the RPM band where the normal R56 makes more power, is absolutely not even slightly noticeable.  The slightly larger turbo is a perfect match for keeping the Mini super responsive and adding more power. What are our future plans? Simple, show our existing parts make power on the new car, and lastly tune the ECU and make even more power!  More boost baby!  We have 1 really innovative product up our sleeves and it will be debuted on the R56!  Just wait and see!