Pretty much every tuner in the world thinks the 2015 STI is the same old boring EJ25 engine and that it's going to tune the same and make the same power. Well I hate to say it, but they're all wrong (as was I)!

Our initial dynoing of the 2015 STI showed something very interesting. It made more power than all previous STI's. I'm not talking about a couple WHP, but more like 20 Wheel HP at 5500 RPM. The other very interesting thing is that the boost comes on slower than it has in the past. So why does it make more power? Did Subaru really push this new engine and tune it much closer to the edge? Why was the turbo laggier? Was this a tuning thing or something else new?

Looking at the boost curve of the 2015 STI and 2008 STI, you can see how much slower the boost comes on. It's roughly 300 RPM sooner on the 08 STI, which is either one or all of these things: Bigger turbo, larger turbine AR, ECU programmed to build slower boost, Cam timing not optimized at low RPM, and or different cams installed. After the initial onset of boost, they run pretty much the same boost. What for sure causes this may take a little while to figure out, but we have an idea what the main change is  :) 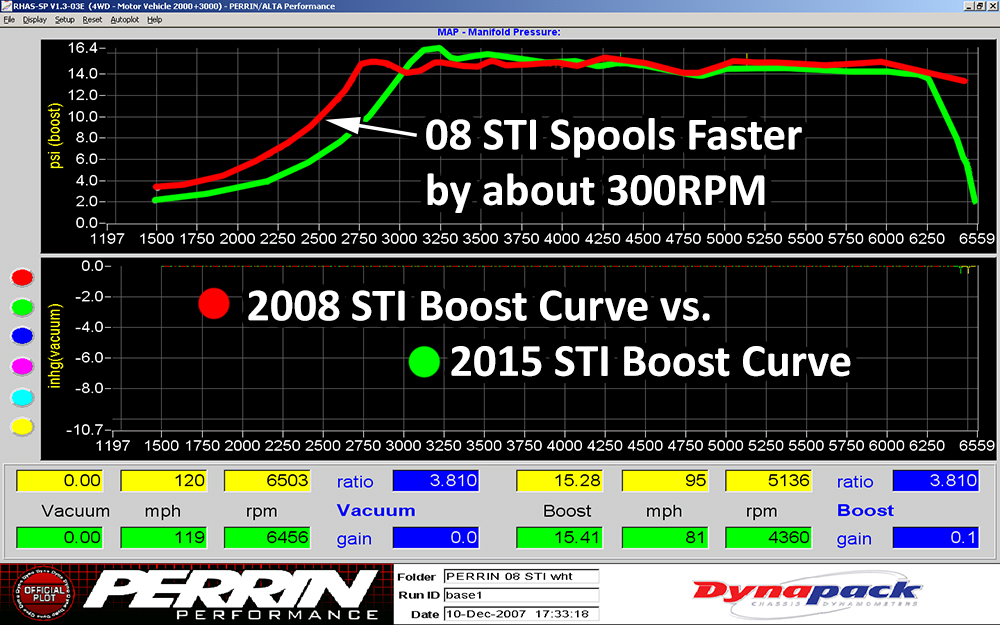 Below is a comparison of the stock HP levels of the 2015 and 2008 STI. You can see how the slower spooling turbo makes for less torque at lower RPM, but then you see how the 2015 starts to make a lot more Wheel HP from 4500 RPM on up. From there until redline it's almost a solid 20 Wheel HP change. 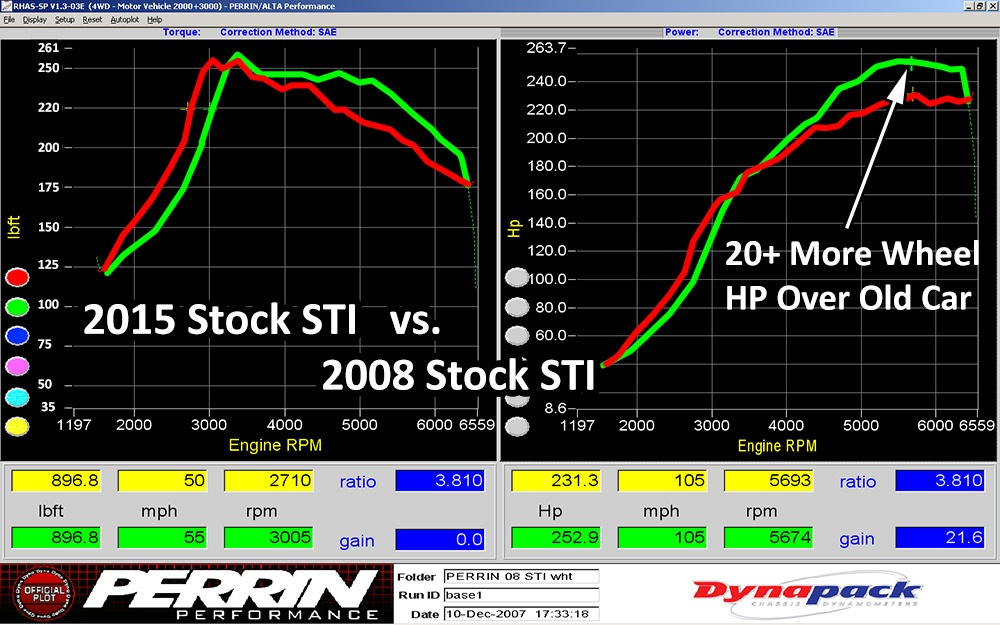 If the 2015 EJ25 STI engine is rated at the same 305HP and 290ft-lbs, how can it be making more power than it had previously? Did the SAE standard for measuring HP change? Did Subaru purposely underrate the HP? No wonder why Subaru said this is their fastest STI built to date. No wonder why the cars are going faster 0-60 than they have before. I am not complaining at all, because I love this car so much!

I may complain if there isn't anymore HP to gain after we can finally tune the ECU...

Lastly is the 2015 WRX and how this new FA20DIT engine does for wheel HP. Below is the 2015 STI vs the 2015 WRX. You can see that the STI still makes way more power than WRX, and it follows the engine rated HP split of 35HP pretty well (305hp vs 268hp). We actually dynoed the WRX before we did the STI, and I was a little worried that the WRX was making way to much power and that the STI wasn't going to show much of an increase. Luckily I was wrong. 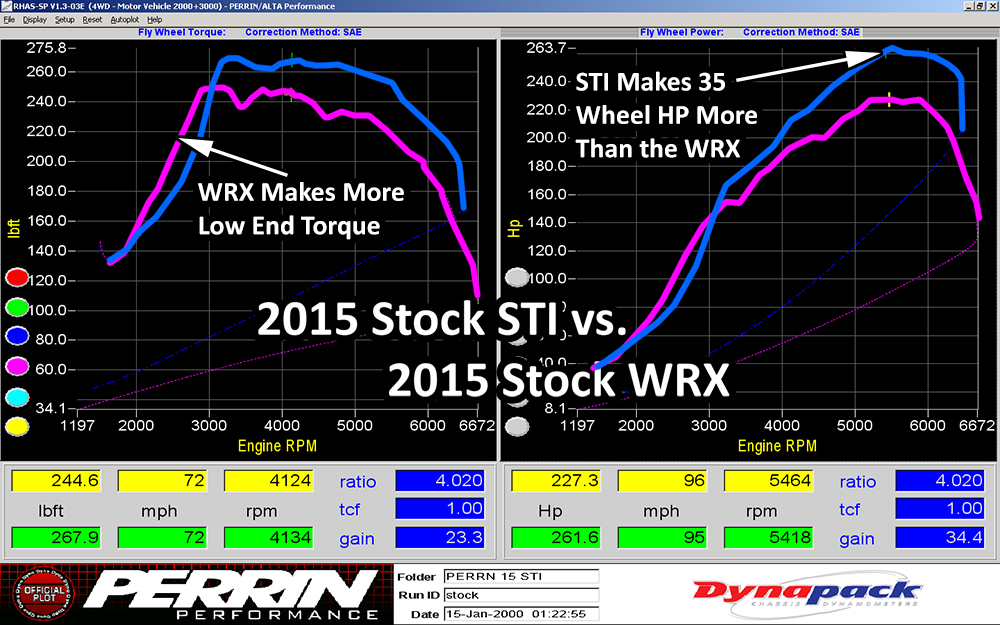 Below you can see the boost curve of the two cars as well. Since the 2.0L WRX engine is smaller, it has to run more boost to get more power. Also another interesting thing is how the WRX builds boost faster than the STI. Being it has a smaller engine and a similarly sized turbo, that is pretty amazing! That new, lower mounted twin scroll turbo is pretty awesome! 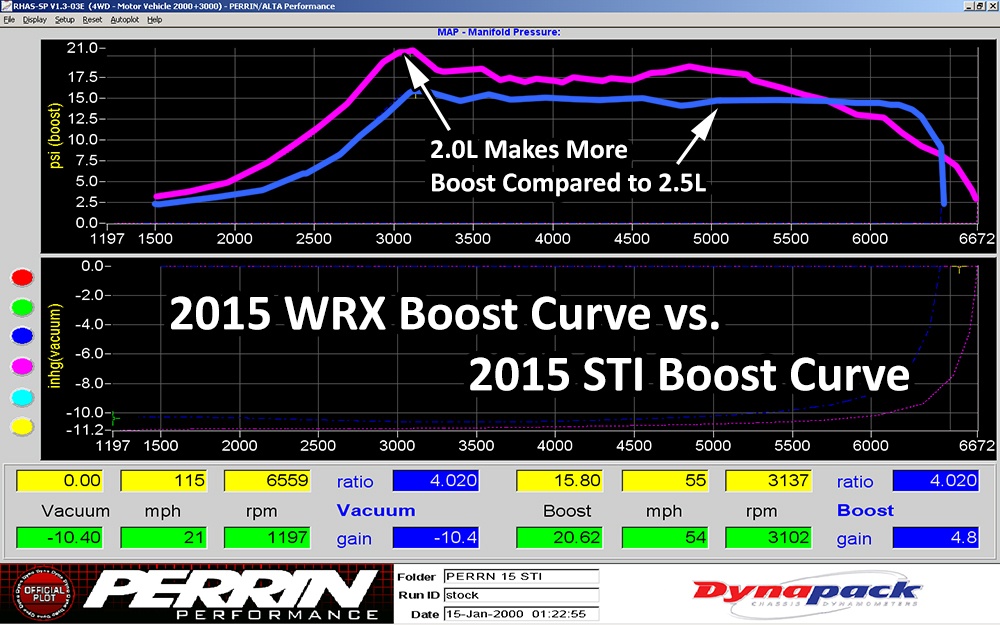 After seeing the boost it runs, how responsive it is, i really think the 2015 WRX has great potential to make quite a bit more power. Dare I say, Stage 1 could be 40WHP gain?? I think it won't be too far off from that!

Now all we have to do is get an Accessport to be able to tune these new cars! Hurry up with that Cobb!