By Perrin Performance Nov 26, 2012
Category : MINI Only Back to Blog

This part has been a long time coming for those with CRV problems. No not the Honda Sport Utility Vehicle, but the Compressor Recirculation Valve on your Mini Cooper S. The problems all started about 3 years after the Mini Cooper Turbo cars came out, where customers started getting check engine lights (CEL's, or DTC's) that were related to their compressor recirc vavle (CRV), then loads of other problems like low on power or weird idle problems or many other things.

How Does a CRV Work?

A compressor recirculation valve (CRV) has a simple job of relieving boost pressure on a turbocharged engine during situations where the throttle is closed quickly. Lets say you are at full throttle and your turbo is pushing 14psi of boost pressure past your throttle body into your engine. During this situation things are working perfectly and the turbo is spinning at 100K RPM's or more. Now its time to shift and you lift your foot off the accelerator pedal, which is where things change. The turbo is still spinning trying to make 14psi of boost but now there is a huge blockage to the engine from the throttle being closed. Just before the boost pressure builds up, the CRV opens, dumping all that excess boost, allowing the turbo to keep spinning and flowing air.

The whole idea with a turbocharger is to keep its RPM's up during shifting and other high load situations, which keeps the turbo lag to a minimum. Without something relieving the pressure in the system, a phenomenon called compressor surge occurs. This is where the build up of boost pressure backs up in the system sending a wave of pressure backwards through the turbo causing it to stop and shutter back and forth. This shutter and surging leads to premature wear on bearings and even complete failures on turbos. Compressor surge is very bad and while some people think it sounds cool, its very damaging.

How Does the MINI CRV Work?

The MINI CRV is connected to the turbocharger directly (not very common). It joins the compressor housing (where the boost is) and the intake part of the turbo. The way its setup is very efficient as when the valve opens, it vents boost right back to the intake system. This design eliminates additional hoses and parts, which means less things to go wrong.

During most situations the stock CRV valve is closed holding boost in the system. It looks like the diagram below. 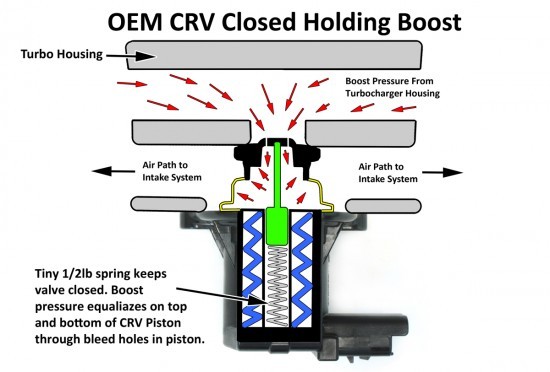 As boost builds in the system, boost is not trying to open the valve because it has small ports on the top that equalize boost trying to open it and close it. Instead it relies on a small spring to keep the valve closed. This works perfectly fine until there are problems in the system. In the picture and diagram below you can see the yellow diaphragm and you can imagine what happens to this under high boost levels. More on this in a few. 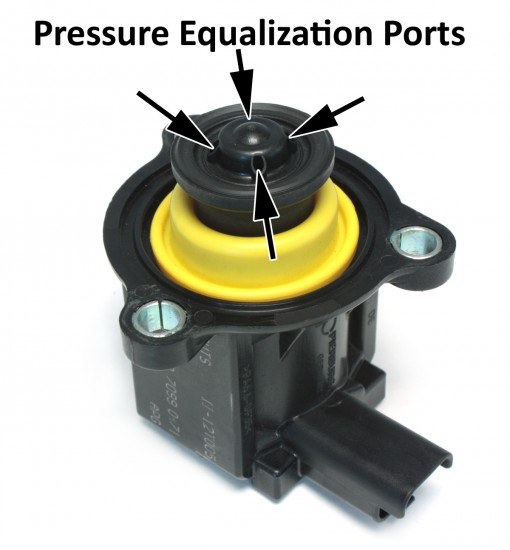 When the ECU energizes the coil, it pulls the valve open and the boost pressure is relieved back to the intake system. The amount of force from the coil is very little, but its more force than the spring has, which is fine when things are working ok. When things are not working ok, coil isn't powerful enough to make it open quickly. During testing we found that a small amount of pressure from a finger or piece of tape would cause it to not open. More on this as well. 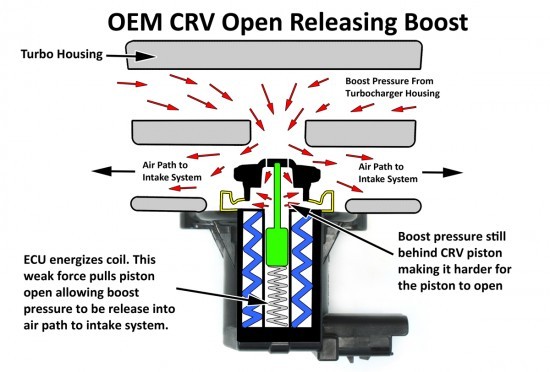 One of the problems is, boost in the system trying to escape, as well as boost inside the CRV piston trapped, trying to get out. This causes some resistance in the valve opening quickly. Imagine 20psi inside the CRV housing and the piston has to work against that to open up! It literally has to blow the pressure out of the CRV housing, through the piston, working against the 20psi its trying to relieve from the system!

Once the valve is opened and all boost is relieved, the ECU de-energizes the coil and the valve closes sealing boost back into the system again.

In the below diagram you can see where the CRV is bolted up to the turbo. You can see how efficiently the CRV dumps pressure right back in front of the turbo into the intake system. This diagram shows the ALTA CRV installed, but you get the idea. 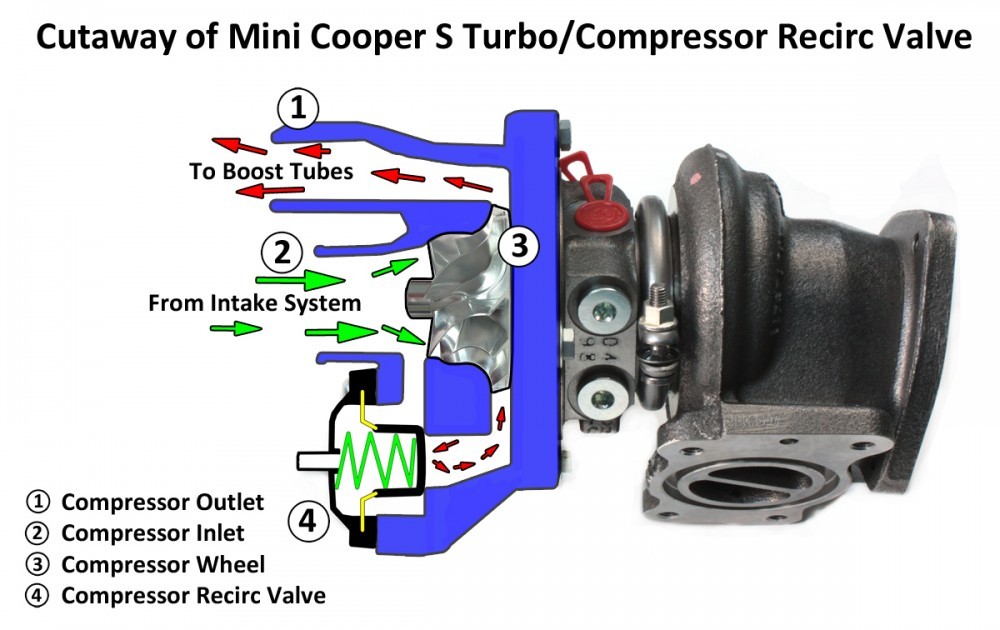 Problem #1, The ECU Controls the CRV

On most cars the CRV or BOV, or Dump Valve (this part has many names) is mechanically controlled by vacuum and a spring.  On the Mini turbo, the valve is controlled by an electronic solenoid doing the full job of opening the valve. The ECU determines the "Best" time to open the valve looking at many data points, like manifold pressure, boost tube pressure, throttle position, and RPM. When the ECU tells the valve to open, there is a delay as the solenoid gets energized, then mechanically opens. The problem is, it's not  fast enough.

Here are two examples of the ECU delaying the valve opening. Using the AccessPORT we can see when the ECU tells the electronic CRV to open. This should be an instant thing as the throttle body starts to close the valve starts to open. In this high load situation below you can see how there is 1/4 second delay before the ECU tells the part to open. Remember, the valve then gets energized and then has to still mechanically open to dump boost. This is around .100  seconds of additional delay. 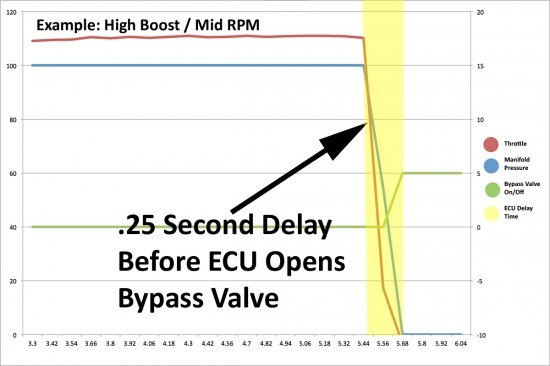 In this low load part throttle situation, you can see there is even more delay.  During this example, you can actually start to hear compressor surge start to happen. This comes through a brief fluttering type sound, or chirping sound. 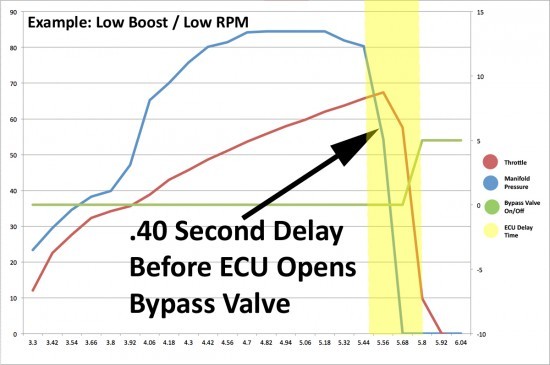 To the general onlooker you may be thinking this is only a half a second! In the high performance tuning world, a half a second is like a 40 hour work week! This delay is a killer as it can cause compressor surge which will damage your turbo over time. Mini gets away with this because its only running 10-12 psi of boost from the factory. Add a few more pounds of boost, a track day, and some other aftermarket goodies and this is when its bad.

The other thing is the ECU can only open the vavle, and it can only do it one way. Its either on or off with no "in between". In certain situations, this can dump boost too quickly making for an abrupt fall off in power.

Lets add to the above delay, and a sticking CRV piston!

The sticking CRV is another problem we started to see about in 2009. This is caused by engine oil (from blow-by from crank case vents) that gets into the intake system, creating a sticky surface for the CRV's piston to stick to. If this car used a normal mechanical type CRV, it wouldn't be a problem, but since it has a rather weak solenoid trying to open a valve (as shown above) it doesn't take much before it stops working. This requires cleaning of the valve and the turbo housing at least every 2 years to ensure this doesn't stick.

As shown in the above diagram, as more boost is run, more pressure is put on the super thin diaphragm. This ballooning expands and pushes it against things it wasn't meant to. As the part actuates in an out, its wafer thin diaphragm tears and then causes a boost leak. When this goes bad, you can't buy just the diaphragm you have to buy the entire CRV from MINI.

How does the ALTA CRV work?

The OEM CRV seems like its a good idea, but its overly complicated and filled with long term problems. We set out to design something that was going to fix all the above problems as well as never be a problem for customers.  So we made the ALTA CRV much simpler and far more reliable by using a more common method to open and close it. 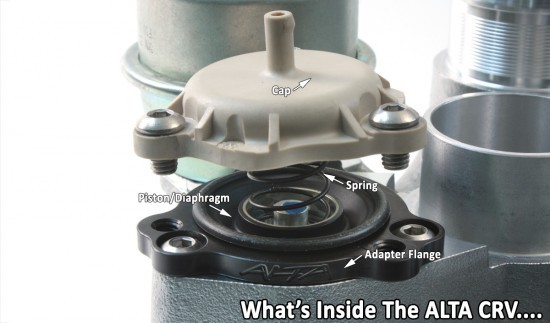 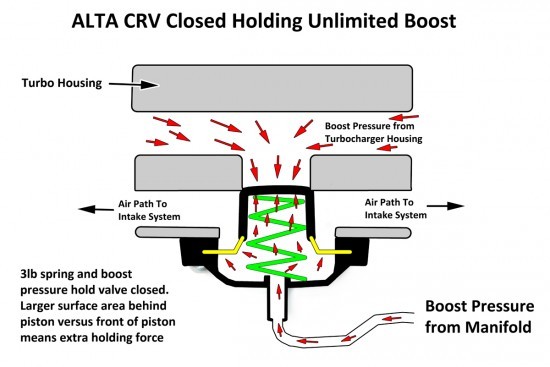 In this situation the ALTA CRV Diaphragm sees the same boost pressure as the stock part did. The diaphragm we use is much thicker and is reinforced, allowing it to handle the added boost with no long term problems. We use this same part on cars that run 30psi or more of boost just to give you an idea how much we trust it!

As the throttle closes a few things happen. The intake manifold now sees vacuum (not boost) and it starts to pull the CRV piston open. The next thing that happens is the boost pressure in system pushes the valve open. Both of these things work against the spring behind the diaphragm. The combination of vacuum pulling and boost pushing open the valve super fast with no delay. 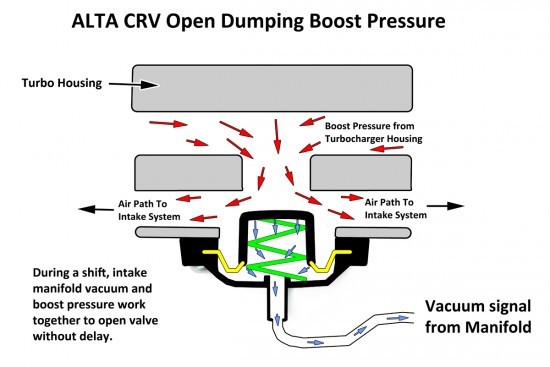 So Why Choose the ALTA CRV?

Cars with an ECU tune that increases boost levels will like this part as you never have to worry about it leaking under boost. The design of the part is such that the boost pressuring pushing it closed is greater than the pressuring try to open the valve under boost. This means that 10psi, 20psi or 30psi of boost is no problem for it to handle! 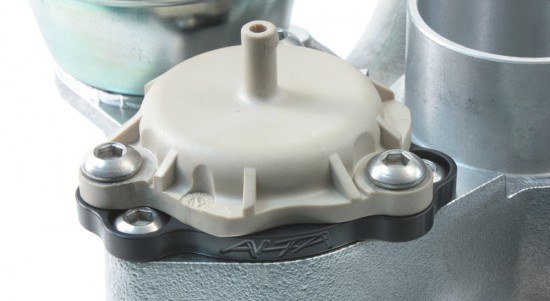