This collection of parts above are typical items you will find in a modern boost control system and many aftermarket type system.s  Some items may not be recognizable, but after you read this, i think you will be able to pick out any of those parts and understand what they do and how they work.
Modern day boost control systems rely on both mechanical and electrical systems to control boost.  The main electronic component is the ECU, which drives an electro-mechanical device that controls the wastegate actuator.  Besides the ECU being an important electronic device in controlling boost, the second most important part is the electo-mechanical device known as the boost control Solenoid.  Below is the PERRIN EBCS Pro (Electronic, Boost, Control, Solenoid) which replaced the OEM Boost control solenoid to provide better more accurate boost control.

In most turbo applications the boost solenoid is used to bleed boost pressure off the hose that actuates the wastegate actuator.  In these applications the boost control solenoid has 2 ports, an IN and an OUT.  The PERRIN EBCS Pro can be setup like the stock solenoid, to "BLEED" boost from the system, but that is not where the EBCS Pro has its advantage.  The PERRIN 3 port EBCS Pro can be setup to "block" pressure from getting to the wastegate actuator. This makes for a more responsive turbo and for much better boost control, not to mention higher boost levels are possible with proper tuning.  In this case 3 is better than 2!
In some cases the EBCS Pro can work with your stock programmed ECU, but to use the EBCS Pro to its fullest, a reprogramming of the ECU must be done.  These days this is no big deal as its something that can be done with nearly any car.  The EBCS Pro also works very well when using stand alone type ECU's where adjusting boost tables are possible.  The EBCS Pro can be used to replace a worn out, or damaged aftermarket solenoid used in a standalone Electronic Boost Control system. In these cases the EBCS Pro will fuction the same, but cost half of a replacement part.
Now included with each PERRIN EBCS Pro is a female harness plug, that plugs right into many OEM wire harnesses. This means no cutting of wires, just simply unplug the OEM one, and plug ours in! Simple as that!  Along with this convenient plug we include a set of instructions to show how to install the EBCS Pro in nearly every type of turbo application out there. I say turbo application because I know there are those guys with their normally aspirated Honda's reading this thinking they can add more boost to their car!  Sure you can, just like you can add a BOV!  If you don't know what a BOV is, that's another article in the works!

How does the boost control system work?

What is a WASTEGATE?

First thing to understand is what a wastegate is and how it works. On most turbocharged engines there is mechanical system called a wastegate (Turbo diesel engines do not have them a lot of times, but that is a whole other story). The job of the wastegate is the same whether internal or external.  Think of the wastegate as a door that opens up and lets exhaust flow around the turbo.  Internal type wastegates are built into the turbo, and External Wastegates a separate mechanism that bolts to the exhaust manifold before the turbo.  Either system functions the same by by-passing the exhaust around the turbo to control boost. 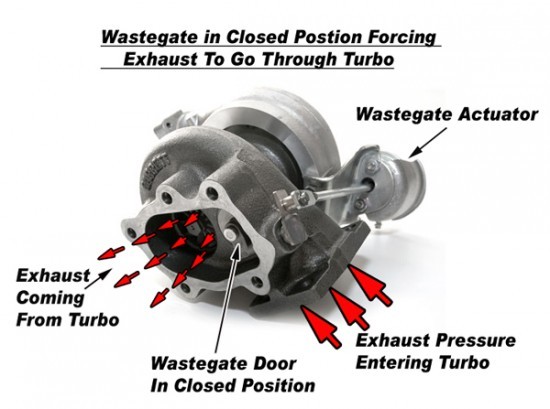 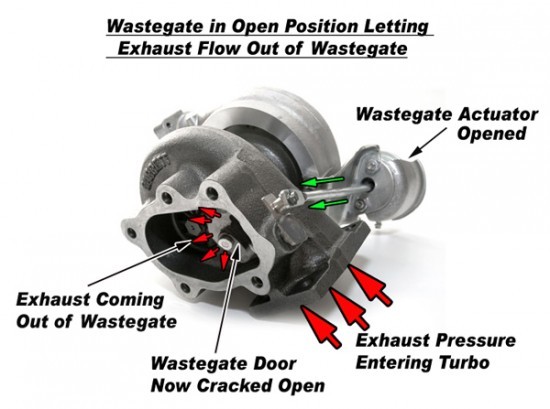 The wastegate opens and by-passes the exhaust around the turbo it changes the speed of the turbo. Which in turn controls boost.  By opening the door, it slows down the speed of the turbo (making less boost).  When it closes it forces the exhaust to flow through the turbo, speeding it up (Making more boost).  The system doesn't work as "on or off" as just described.  Its not just opened or closed to control boost, but modulated to many varying degrees to divert just enough exhaust around the turbo to create the desired boost.  The above diagrams shows an internal wastegate in both the open and closed modes.  The first picture illustrates the exhaust passing through the turbo with the wastegate door closed. The second picture illustrates the wastegate door open and it diverting exhaust pressure around turbo. 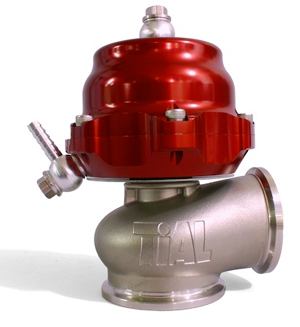 Above is a cutaway showing the basic construction of an internal wastegate actuator.  Picture 1 is showing it in resting position and picture 2 shows it with boost applied to it.  The Red represents the diaphragm, the green represent the spring.
An external wastegate doesn't use a door but rather a valve not much different than an exhaust valve inside your engine.  The valve has a seat that it sits on blocking the exhaust pressure.  The valve simply lifts off the seat to divert the exhaust around the turbo.  The valve is actuated by an actuator like an internal wastegate but the actuator and valve are all one piece.

The above picture shows a cutaway of an external wastegate.  Picture 1 shows wastegate in resting postion, and picture 2 shows the wastegate open.  The red represents the diaphram, the green represents the spring, and the blue represents the valve.  The orange arrows represent exhaust flow.

ACTUATOR what is that?

The actuator for both types is the most important part to understand as it is what ultimately controls boost.  Actuators have a pneumatic portion that controls the mechanical movement, and the movement is resisted by a spring.  Using the above diagrams you can see they have chambers divided by a diaphragm.  Pressure can be applied to either side of the diaphragm.  As pressure enters these chambers they cause the valve to actuate but only after the pressure exceeds the springs pressure.  Meaning if the spring is a 10psi spring, the valve will not start to actuate until the pressure in the chamber goes above 10psi.  An internal wastegate typically only has 1 chamber were pressure is applied to (shown above).  An external wastegate can have 2 chambers as shown above which we will get into later.
Both types have to work against exhaust pressure. So the design of the wastegate can be very important to ensure that the exhaust back pressure doesn't effect the desired boost. In many OEM setups this is a factor that works against the boost control system. Meaning that maximum boost may not be able to be reached because the exhaust back pressure is opening the wastegate regardless of what the actuator is doing.  This is not good for us when trying to make big power, but it is smart for an OEM to design a system with this in mind as this inherently has some safety features built into it.
Now that you understand how the wastegate changes the speed of the turbo, and how the wastegate is actuated, the next diagram will make a lot of sense.

How do you get more boost than the spring pressure in the wastegate?

Above we describe the basics on how your boost control system works and the components involved. Some of the diagrams were common items found on stock turbocharged engines, and some only found on aftermarket turbo systems. In both setups, its possible get more boost from your turbo, than the pre-set wastegate spring pressure. This is done by using different methods to change the boost signal getting to the wastegate actuator.  Check out Part 2 of Boost Control Systems Explained, and you will find out how you can get more boost from your turbo!